The Pre-Existing Depressive Disorders, Substance Use Disorders Predicted the Suicidal Death of the Patients with Eating Disorders ÃÂÃÂ¢ÃÂÃÂÃÂÃÂ A Preliminary Result of National Health Insurance Research Databases in a Chinese Population

Recent evidence suggests that additional psychiatric disorders in patients with eating disorders (ED) may contribute to suicide risk. The aim of our study was to investigate the association between eating disorders, its comorbidity and suicidal deaths by the analyzing the data from National Health Insurance Research Databases (NHIRD) and statistical reports on the causes of death.

We identified 19,648 patients with ED diagnoses from the Taiwan National Health Insurance Database between 2001 and 2012. The patients who had been diagnosed eating disorders ≥4 times at outpatient visits, or had ≥1 time of hospitalization were recruited as the group of ED (N=9974). The outcome of measurements was defined as the death of the group of eating disorders either by suicide (N=113), accidental death (N=35) or others (N=97). Cox regression was applied to investigate the relationship between psychiatry comorbidities and the suicidal death of the patients with ED.

Eating disorders (ED) are complex chronic mental disorders, accompanied abnormal eating habits and weight control behavior. ED are relatively rare among the general population, but its affect adolescent in many developed countries [1]. In the 20th century, ED attitudes and behaviors increased dramatically across Asia’s high-income populations of young females [2], and psychiatric disorders associated with risk for the development of ED [3]. Previous studies have individuals with ED report histories of anxiety [4], depression [5], substance abuse [6], and personality disorders [7] maybe play an essential role in the development of eating disorders.

However, Clinical studies also indicated that comorbid psychiatric disorders had been associated with suicide attempts in individuals who have an ED [8-12]. As such as the rate of suicide attempts is 3–20% and 25–35% in patients with anorexia nervosa and bulimia nervosa, respectively [9], but little is known about the risk factors associated with suicidal death among the patients with ED. In addition, although most studies have used community samples or enrolled patients at primary care clinics [13,14], even in Asia have been cross-sectional survey questionnaires with face-to face interviews or case reports in select population [15-18], the results of the studies were inconsistent due to the small sample sizes, racial differences, and the use of different assessment scales and changes in the sources of diagnostic criteria. Here we present an investigation with regards to the impact of the characteristics including the subtypes of ED, demography data, and psychiatric comorbidities in the relationship between ED and suicidal death with the analysis of Databases.

All data had been obtained from the Taiwan’s Health and Welfare Data Science Center, Ministry of Health and Welfare between 2011 and 2012. Data includes the National Health Insurance Database, statistics reports on the causes of death, and household information, regarding annual national marital status and level of education. The data transmissions were encrypted and linked with a personal ID between Databases. The Taiwan National Health Insurance scheme covers 99% of Taiwan’s population and provides data on consultation, emergency consultation, and inpatient diagnoses of insured people. This database demonstrates the healthcare utilization of Taiwanese citizens [19].

We identified the ED group based on an International Classification of Diseases, Ninth Revision, Clinical Modification (ICD-9-CM) code 307.5X and 307.1 of the National Health Insurance Database (NHID) from 2001 to 2012. There were 19,648 patients were screened with the diagnosis of eating disorders by psychiatrists in NHID. The ED group was defined as either having been diagnosed ED equal to or more than four times at outpatient visits or had at least one time of hospitalization with the diagnosis of eating disorders (n=9,974). They were included in the current study and classified into the four following groups based on the diagnosis: AN (anorexia nervosa, ICD-9-CM code 307.1), BN (bulimia nervosa, ICD-9-CM code 307.51), AN+BN (the presence of both anorexia nervosa and bulimia nervosa, ICD-9-CM code 307.1 and 307.51), and EDNOS (eating disorders not otherwise specified, ICD-9-CM code 307.52–307.59). The followup period was defined from the time of first ED diagnosis until death or study termination. Figure 1 outlines the process of sample inclusion. 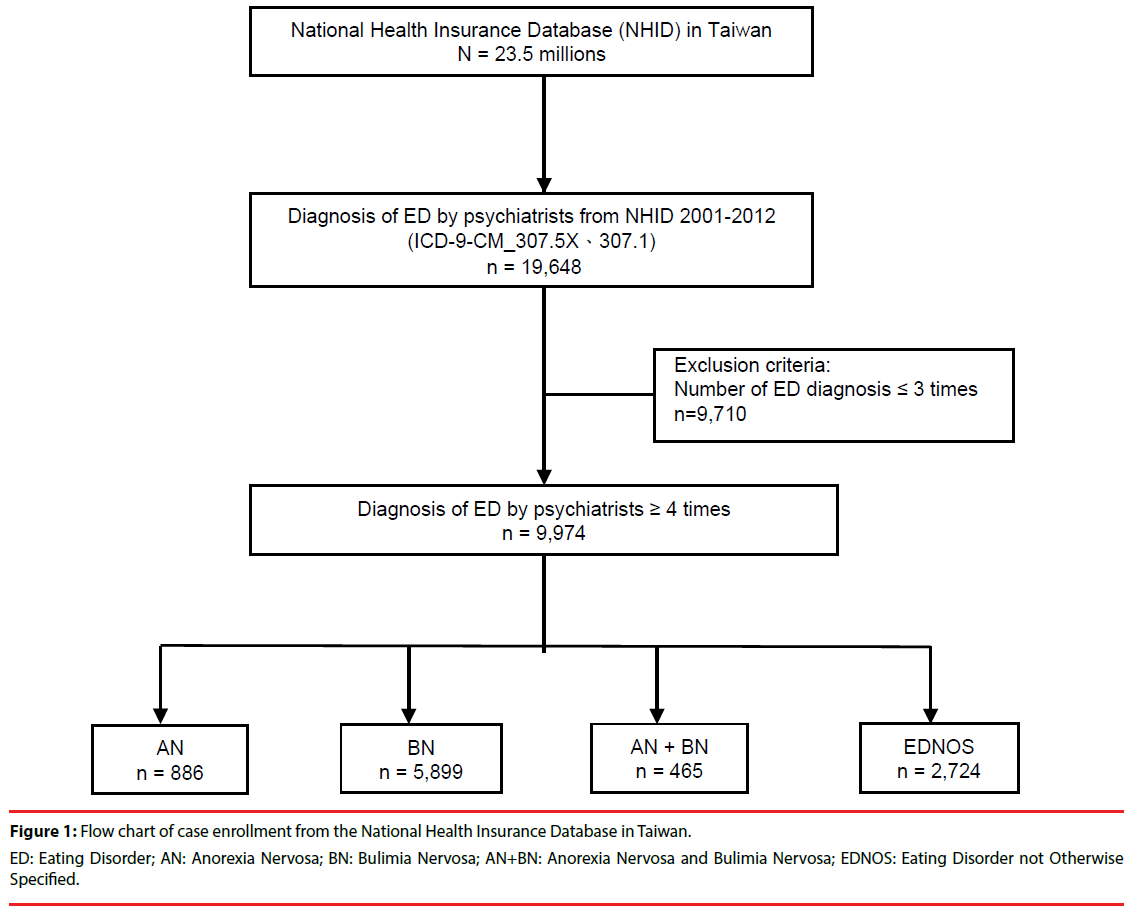 We also used the following parameters included income group, treatment period (time of the first ED diagnosis and treatment, to the time of the last ED diagnosis), history of suicide (E950-959) and information regarding the marital status and educational level were collected from the connected household data. The status of death (including a cause of death/suicide/unnatural death) of all follow-up cases of ED was collected from mortality statistics. The occurrence sequence of first diagnose psychiatric comorbidities were defined pre-existing (the period before ED), concurrent (in the same period with ED), and subsequent (the period after ED).

The data analyzed in this study included gender, marital status, educational level, comorbidity, which were presented as percentages, while age at the time of treatment, treatment period, length of the follow-up, were presented as mean ± standard deviation. The differences of all variables between the different types of ED were evaluated using Chi-squared tests or a single-factor analysis of variance (ANOVA). The Cox proportional hazard model was used to investigate the association of suicide risk and mental illness in patients with ED. Statistical significance was set at P<0.05. All data were analyzed using the statistical software, SAS Version 9.3 (SAS Institute, Inc, 1995, Cary, NC).

S.D., standard deviation
#Cells that have less than 2 patients are not permitted to appear in the table, to avoid their possible identification.

Table 1: The demographic characteristics of four subtypes of eating disorders.

▪ The risk factors associated with suicide

Consistent with previous studies [20,21], our result indicated that more female patients than male patients with ED diagnose. Patients with AN were found to have an earlier onset of disease aged 11–20 years (n=429, 48.4%), while patients in the other three ED groups were mostly 21–30 years. Our finding is similar to the results of an early investigation of ED from United States National database of Health insurance [22,23], although gender and age did not influence risk factor of suicide with ED.

Our finding indicated that history of major depressive disorder, but not concurrent depressive disorders predicted suicide of the patients with ED. However, the concurrent rate with depression (9.4-21.2%) had been found to be higher than those who without (1- 3%) of patients with BN in previous studies [24,25]. Godart et al. [26] also found the lifetime prevalence at least one mood disorder varies considerably, from 24.1–90% with BN, while it was 31–88.9% for AN. Furthermore, patients with ED have a higher prevalence of concurrent mood disorders than the general population. Tseng et al. [27] also conducted a study on psychiatric patients and found that patients with ED had a high percentage of comorbid depressive symptoms (41.3–66.7%), followed by bipolar disorders (16.7–49.3%). They demonstrated that patients with ED and comorbid bipolar disorders showed an increased risk of weight dysregulation, impulsive behavior, and suicides. Additionally, alcohol abuse, selfharm, and illicit drugs use were common in women with bulimia and binge eating disorders [28]. Novelty seeking, self-directedness and impulsivity were proposed to be associated with both the pathology of substance use and bulimia [29]. Moreover, the prior substance use might complicate the treatment of eating disorders [30]. Those findings provided the evidence and were consistent with our finding that either history of major depression or prior substance use might also be associated with the suicidal death among the patients with ED.

Some limitations of the study must be noted. First, to increase the specificity of the ED diagnosis, only patients with ≥4 diagnoses by psychiatrists was included in the study. Second, the data from the National Health Insurance Database lacked some clinical information, such as height, weight, family history, blood examination, and psychological behavioral therapy. This could have limited the comprehensive comparison of similarities and differences between patients with different types of ED. Third, data on the level of education of the patient cohort in the current study were obtained based on the enrollment status. Since this data does not require mandatory recording, part of the data could be missing; thus, its accuracy requires further confirmation.

In fact, apart from psychiatric disorders affecting the risk of suicides, other factors such as genetics [39,40], society [41,42], family [43], and cognitive behavior [44,45] may have also increased the risk of suicidal thoughts and depressive symptoms. This study only carried out a preliminary investigation based on databases. Future studies focusing on one type of ED, including a collection of medical examinations and survey questionnaires, could be conducted to further validate our findings.

The risk of suicide was linked with psychiatric comorbidity in patients with ED, particularly those with pre-existing major depression and/ or substance use disorders. Future longitudinal studies were warranted to validate the preliminary results from the investigation of databases.

The data from this study were provided by the data science center of the Taiwan Ministry of Health and Welfare. The explanation and conclusions do not represent the views of the Ministry of Health and Welfare. This study was supported by the Tri-Service General Hospital (TSGH-C105-139). CLY, JCC and MKY were responsible for study concept and design. SCW acquired the data. CLY, JCC and CBY analyzed and interpreted the data. CLY and JCC drafted the manuscript. MKY and CBY critically revised the manuscript for important intellectual content. MKY provided administrative, technical or material support. All authors contributed to the manuscript and approved the final version.

This study also approved by the Institutional Review Board of the Tri-Service General Hospital (reference number 1-104-05-048) and was conducted in accordance with the Helsinki Declaration. Informed consent from patients was not required for this study, as they were not asked to follow rules of behavior. Patient data were coded and anonymity of patients was guaranteed.

None of the authors report any conflicts of interest. 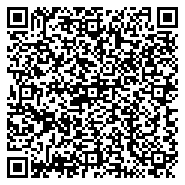