This study investigate the influence of rehabilitation on prevent dementia in Parkinson’s disease patients.

This was a retrospective cohort study analyzing data from the National Health Insurance Research Database in Taiwan between January 1, 1997, and December 31, 2007. Patients with newly onset Parkinson’s disease initially receiving any anti-parkinsonism drug were followed up to evaluate the effect of rehabilitation on Parkinson disease dementia. Cox proportional hazard models were employed to evaluate the relationship between cumulative times of rehabilitation and the incidence of subsequent dementia in adult with Parkinson’s disease, adjusting for age, sex, cerebral vascular accident, hypertension, diabetes, dyslipidemia, mood disorders, drug use and comorbidity.

To further explore this issue, we investigated the association between rehabilitation treatment and risk of dementia occurrence among Parkinson’s disease patients in Taiwan by reviewing the medical data of a sample from the National Health Insurance database, a claims database that is representative of the general population in Taiwan.

Rehabilitations were identified according to NHI medical records. Rehabilitative programs comprised therapeutic exercise, posture, muscle strengthening, endurance, ambulation and balance training to achieve functional improvement and ambulation balance. The times of rehabilitation that each patient received are calculated and are treated as time-dependent variables.

ICD-9-CM codes 290.0, 290.1, 290.2, 290.3 and 331.0 were used to search for outpatients and inpatients with a new diagnosis of dementia during the follow-up period ending on December 31, 2007. Person-years of followup were determined by calculating the interval between the date on which Parkinson’s disease was diagnosed and whichever of the following dates was first: date of dementia diagnosis; date of withdrawal from the NHI program; date of death, or the end of 2007.

Chi-square test or Student’s t test was used to compare differences in age, sex, urbanization levels of residential area and comorbidity, including diabetes, hypertension, stroke, hyperlipidemia, and incidence of dementia, between Parkinson’s disease patients with and without rehabilitation. The dementia-free survival rates were estimated using the Kaplan–Meier method between the patients with and without rehabilitation.

Time-dependent analysis was performed using the Cox proportional hazard model to investigate the time-effect of rehabilitation on reduction in dementia risk. All analyses were performed using SAS statistical software. The results were considered statistically significant when two-tailed p-values were less than 0.05.

We identified 4160 patients with new onset Parkinson’s disease during the period from 1997 to 2007. A total of 3452 patients were rerolled in this study after excluding those who were less than 50 years old and those who already had dementia at the baseline (Figure 1). The mean follow up period of patients was 4.9 years. Of the 3452 patients, 1069 subjects received rehabilitation care during the follow up period and 2383 did not. Compared with patients who did not receive rehabilitations, patients who received rehabilitation services had significantly higher prevalence of hypertension (Table 1). 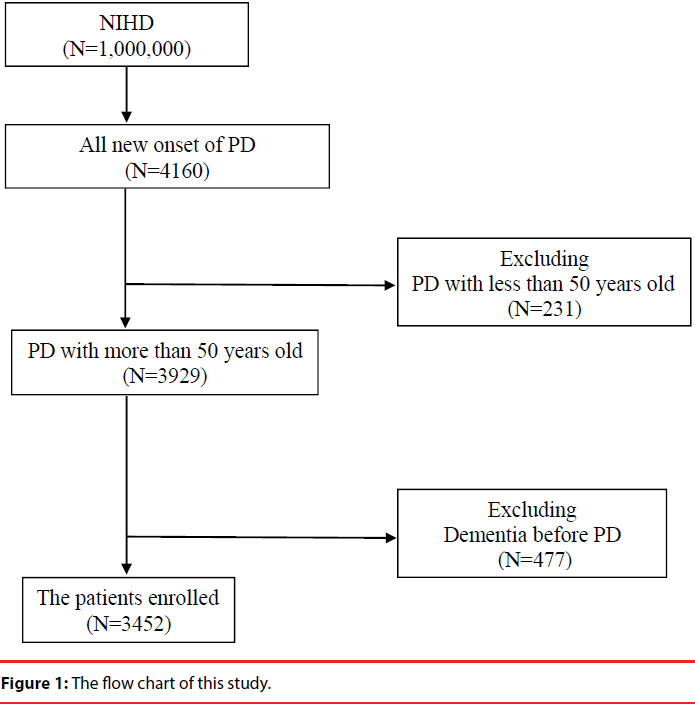 Figure 1: The flow chart of this study.

Table 1: Demographic characteristics and comorbidity medical disorders of Parkinson’s disease with and without rehabilitation. This study has several limitations. First, we did not consider the severity of Parkinson’s disease due to data limitation. Previous study showed that the severity and type of motor dysfunction wound affect the incidence of dementia. But patients with severe motor dysfunction have more prevalent in the rehabilitation cohort. These patients had higher risk to develop dementia. Thus, the effect of rehabilitation may be underestimated. Secondly, Parkinson’s disease and dementia may have genetic factors. However, confounding of genetic factors was not likely to occur because there is no evidence that the genetic factors ought to differ between patients being selected to receive or not to receive rehabilitation therapy. In addition, we did not consider the difference between physiotherapists and the rehabilitation program, and it is possible that different rehabilitation programs might have different effects on patients. Future research should focus on the different effect between different rehabilitation programs. Finally, we did not evaluate the effect of drugs that may affect the cognitive function, such as benzodiazepines and antidepressants, though we did adjust for comorbid mood disorder. These patients had more prevalent to use these drugs.

The authors declared no conflict of interest.