Suicide in Medical Doctors: A Review from Mainland China, 2008-2016

The purpose of this review is to summarize cases of Chinese doctors who have committed suicides between years 2008 and 2016. Moreover, we would like to appeal to the government and the public to increase their efforts to reduce death among Chinese doctors. We have reviewed public reports from local media, medical websites, official documents, and articles published in PubMed, Google Scholar, China National Knowledge Infrastructure (CNKI), and www.dxy.cn (a popular medical web in China) between years 2008 and 2016. Identified articles were published in either English or Chinese. A total of 51 cases (16 females and 35 males) of doctor suicides were reported or published between 2008 and 2016. Most incidents of death occurred between 20-59-year-olds, with a higher number observed within the 30-39 age group. Notably, the Jiangsu province had the highest number of reported doctor suicides (9 cases). Furthermore, detailed analysis revealed that the department of pediatrics (18%, 9/51) topped the number of suicidal rates when compared to the other hospital units. Suicides occurred more often in the full-service, tertiary hospitals, accounting for 63% (32/51) of the reports. Jumping from a building was the most common way of death recorded, accounting for 55% (28/51) of total cases. Suicide is not just a medical issue but also a social concern. A key to reducing deaths by suicide in Chinese doctors should be a commitment of both the Chinese government and medical organizations to establish and implement a coordinated plan of action.

Due tolong-term exposure to high levels of occupational stress, medical doctors are vulnerable to the onset and development of some psychiatric disorders (such as anxiety, depression, and burnout syndrome), which trigger them to have increased suicidal ideation and attempts [1-3]. Recently, several studies have demonstrated medical doctors seem to have a relatively elevated risk for suicide. For example, Hawton et al. reported that the annual suicide rate was 18.8 per 100,000 for female doctors of England and Wales. The standard mortality rate for deaths by suicide was respectively 201.8 and 66.8 for female and male doctors, as compared with the matched general population [4]. Subsequently, Hawton et al. further reported 1.87 and 2.10 relative risks for suicide in physicians and dentists compared to 1.25 in the general population using data from the national registers for Denmark [5]. Petersen et al. also found an elevated suicide rate for white female physicians (standardized death rate ratio = 2.39, 95% CI = 1.52-3.77) compared to the working US population, but not dentists [6]. In a meta-analysis, the aggregate suicide rate ratio was estimated to be 1.41 [95% confidence interval (CI), 1.21 - 1.65] for male, while 2.27 (95% CI, 1.90 - 2.73) for female physicians, compared to the general population [7]. However, studies regarding suicide of medical doctors remain rare and suicide rates vary between countries.

Recently, a lot of deaths in Chinese doctors have been reported as social media tools become a mainstream. The purpose of this study was to a) preliminarily summarize the suicide events in Chinese doctors from 2008 (when the Internet is starting to become widely used) to 2016; b) describe their characteristics to explore potential risk factors; and c) call for action to prevent more suicides from happening. 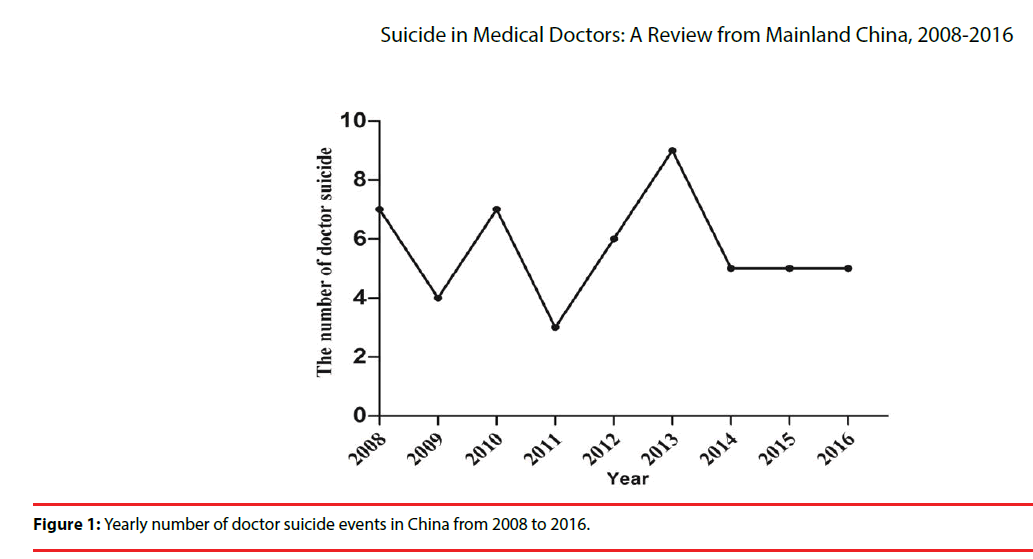 Several studies have been performed on the issue of suicide of medical doctors in various countries [3,4,12,13], but research for mainland China has not been reported. In this review, we, for the first time, summarize 51 suicide events in Chinese doctors from 2008 to 2016. Our findings suggest that the suicide rate was particularly high in doctors with male sex, age in the 30 - 49 years, service in the department of pediatrics of large hospitals (secondary and tertiary hospitals) and high professional title. Jumping from the high building is the main suicide method for these doctors. Our results seemed to be in line with some of previous studies as following:

It is previously believed that more stress may be present in the female doctors due to their in escapable responsibilities for housework, children, and elderly care. Combining with the high workload, they may be very exhausting and possibly have more suicidal ideation than the male [14]. However, recent studies indicate the number of the suicide events in male doctors was obviously higher than the female population [4,15-17]. This finding may be potentially explained by the following fact that: 1) the proportion of male doctors is commonly higher than the female in the hospital; 2) the financial pressure is relatively larger for the male doctor because many doctors earn as little as 5,000 yuan RMB (US $780) or less per month, and senior doctors’ consultation fees are just 7 yuan RMB ($1.14) [11], which is insufficient to support their family, or even lead to several male doctors being single. Unmarried status is another important risk factor for suicide owing to lack of comfort from a family when they encounter work related problems. It is reported that the relative risk of suicide for a single male physician is accordingly 15.5 times higher than for a married/cohabitant female physician [15].

Committing suicide was the highest in the age group of 30- 39 years old, which was also in accordance with the study of Hawton et al. [4]. Physicians in this age group might undergo a lot of work stress because they usually graduate the higher education and are early in career path. This speculation can be indirectly demonstrated by our previous study on Karoshi, in which we also found most cases of Karoshi occurred in doctors aged 30 – 59 years, especially in those aged 30 - 39 years [9].

Since physicians have the knowledge and accessibility to lethal drugs, self-poisoning is suggested as the most common suicidal model for physicians [15,16]. However, in our study, only few doctors used this method. Hanging/ suffocation and jumping from heights were other leading suicide methods by doctors as described previously [12], which was also proved in our study.

The high suicide rate in doctors served in the large hospitals (secondary and tertiary hospitals) and with high professional title may be attributed to overwork and medical violence.

Patient trust is low for clinics and community health centers, and they often seek care in larger hospitals, which leads to overwork in most doctors [10]. You can regularly hear complaints from doctors: ‘I am swamped and tired, no time to get rest, no time to spend with families, no time to take care of the children. ‘According to a report from the Ministry of Health, Labor and Welfare (MHLW) of Japan, Japanese physicians reportedly worked 66.4 hours on average per week in 2005; this work-hour is much longer than in European countries [18]. In public hospitals in Shenzhen of southern China, it is also reported that working lengthy was more than 60 hours a week in most doctors [2]. In addition, doctors’ tasks have become more complex and risky due to the introduction of new diagnostic and treatment methods. Also, patients’ demands and the number of law suits associated with medical accidents have increased. All these further added the stress to doctors [19].

Patients’ high expectations and patient-doctor distrust often lead to the occurrence of medical violence [10], which may cause mental illness for doctors, such as anxiety and depression [2]. Only a few doctors with symptoms seek medical help [20], but these who cannot bear this stress may opt to commit suicide. The negative act of gatekeepers is also responsible for high physician suicide rate. The US Air Force (USAF) identified suicide as a department-wide problem in the early 1990s [5]. The program identified leaders (supervisors in all units) who serve as gatekeepers to oversee the risky individuals. In China, supervisors in the health system do little to help. They cannot stop impacts from patients and their families, and they have no law enforcement power. ‘My love goes forever to my wife, and apologies to my colleagues’ wrote by Dr. Zhou before he hung himself. Dr. Zhou was a dedicated liver surgeon working in Sichuan Province Hospital. Due to poor wound healing in a 60-year-old woman who suffered from complex gallstones, the patient and her family frequently went to the hospital to create noise, and disturb Dr. Zhou’s work flow. After continuous entanglement, Dr. Zhou lost his patience, felt sleepless and burnout. One morning, Dr. Zhou committed suicide, leaving behind his wife who had suffered from ovarian cancer for 7 years, and his unattended 90-year-old mother. Similarly, Dr. Zhang, a 40-year-old urology doctor in an oncology hospital in Fudan University, Shanghai, ended his life by jumping from a building, due to a medical event. Doctors in many hospitals refuse to perform surgery in a metastatic tumor patient. After insisting and ensuring not to get the doctor in trouble, Dr. Zhang was moved by the plea of the patient and his family and went on to perform the risky operation. However, because of the poor prognosis the outcome was not well and the patient died in a short time. To Dr. Zhang’s surprise, the patient’s family became furious with him. They claimed that Dr. Zhang was responsible for the patient’s death, and demanded compensation for the lost life by asking a great amount of money. After several months of being tracked, wrangled and threatened, Dr. Zhang fell ill to severe brain problems and pain. He had to seek help from a psychiatrist but unfortunately that did not help. A tragedy happened again. ‘Another doctor left the world,’ people sadly sighed.

To reduce the suicide rate, 1) the Chinese government should improve the policy of restricting doctors’ work-hour. Overworked individuals should be able to consult a specialist without fearing the opinions of family, coworkers, and friends; 2) the department supervisors should study the experienced Suicide Prevention and Depression Awareness Program in 2009 launched by USAF [21]. In the suggested model, the strategy included educational outreach to destigmatize depression and remove roadblocks to treatment, web-based screening, in-person assessment, and referrals. Medical students should also be educated on the risk factors and recognize warning signs of burnout and depression and be equipped with setback and failure-resistance strategies; 3) harmonious and friendly relations between doctors and patients should be built as described in our previous study [10].

There are several limitations we can acknowledge in this review. First, the number of physicians’ suicide is not accurate, as all recorded suicides were collected from websites or media. Some suicides may be underreported. Second, we are not completely sure whether part of suicides is due to overwork or not. There is no actual reported information of an individual’s suicide work-hour on the websites. Third, several suicide methods (5%) were unknown, and we became informed of the death from websites or media reports.

In summary, physician suicide is rigorous in China, and the government and medical institutions should act to prevent or guide physicians to fight the difficulties they encounter. They should also provide more free space and spare time to Chinese doctors. In response to doctor suicide, the appropriate law should be formulated by the government to ensure physicians’ benefits, and to create a harmonious social environment. If physicians themselves are not well, they cannot serve their patients well either.

This study was supported by a grant from Chinese Medical Association Medical Education Branch and China’s Higher Education and Medical Education Committee (2016B-YD002), Shanghai Higher Education Academy (GJSL1604), the Key Specialized Construction Project in Medicine of Shanghai (ZK2015A15) and Construction of key Academic Groups in Nephrology in Pudong New Area (PWZxq2017-07). All authors have approved the final version of the manuscript and have agreed to submit it to this journal. Yang XH and Zhang BL contributed equally to this paper. Authors have no conflicts of interest. 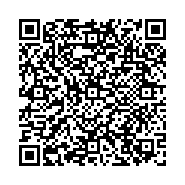