Methods
In this work, we analyzed if there is a correlation among: (a) the Sentence Writing of MMSE and global outcome score at the same test; (b) the length of the sentence (n° of words) and disability’s degree (healthy subjects, Mild Cognitive Impairment, Dementia); (c) the semantic
meaning (Abstract Thinking - AT vs. Concrete Meaning - CT) of the phrase and different Disease such are: probable/possible Alzheimer’s Disease (AD), Parkinson Disease (PD), Fronto-Temporal dementia (FTD)and Vascular dementia (VD).

Results
We observed and detected a statistic difference among Control Group (CG), MCI Group and Dementia Group (DG), and MMSE score; a significant association between CG phrases in DG has been found, such as in MCI, AD, VD, PD and FTD respectively. These findings
suggest that the progression from MCI to Dementia could led to a progressive loss of Abstract Thinking, and a tendency towards Concrete Thinking in writing. As shown in Intra-Group analysis, significant correlations have been reported between: MMSE overall score and Number of Words written in Sentence Writing in FTD Group and VD Group and, moreover, a significant positive correlation was found in CG and MMSE score (especially in PD group).

Conclusions
Number of words and significance of the MMSE sentences (abstract/concrete) seems to be an important clinical marker for progression of neurodegenerative process from MCI to Dementia.

The written word and language have always revealed many aspects of human intellectual functions and behavior. Hand-writing activity, most of times, shows in words what people think, feel and behave [1,2]. In normal aging, syntactic complexity of written production decreases, usually associated with deficits in working memory, reduced speed of information processing and changes in the effectiveness of inhibitory control, although vocabulary level is preserved [3,4,5]. On the other side, a neurodegenerative condition, such as dementia, can lead to agraphia; defined as a partial or total loss of the ability to produce written language. When severity of disease increases, deterioration in spelling, poor narrative organization, content word errors and perseverations, reduced syntactic complexity and shorter sentences were present [6].

The Mini Mental State Examination (MMSE) [7] is the most frequently brief cognitive screening test used for cognitive impairment, diagnosis of dementia and related disorders. It assesses various cognitive domains, namely orientation, registration, concentration, short-term memory, language and visual spatial function. The MMSE includes a request to “write a sentence” of own choice, with a subject and a verb, that has a sense. It can be used to evaluate the textual production of patient and may help to assess the impact of global cognitive status over textual production.

Yan Press et al. [8] found out a significant association between the number of words per sentence and the cognitive diagnosis: the shortest sentences were written by patients with dementia, Mild Cognitive Impairment (MCI) subjects wrote slightly longer sentences, and the longest sentences were written by patients without cognitive impairment. Moreover, a previous study found a correlation between the degree of cognitive impairment and a decline in the ability for sentence writing: while 85% of non-demented elderly wrote a correct spontaneous sentence, only 67% of those with dementia, 41% of those with moderate dementia and none with severe dementia were able to write a sentence [9]. In addition, in younger people, the use of words in their positive sense within a written sentence predicted better health and a functional outcome [10]. In normal aging, are more often used words with positive significance and future tenses, instead of fewer self-references [11]. Moreover, various authors reported that the develop of abstract thinking (that can be expressed in writing’s tasks) might have different functional outcomes depending on neuropsychological deficits [12,13,14].

In this work, we analyzed if there is a correlation among: (a) the Sentence Writing of MMSE and global outcome score at the same test; (b) the length of the sentence (n° of words) and disability’s degree (healthy, MCI, Dementia); (c) the semantic meaning (ex: “today it’s a beautiful day” which has an abstract meaning versus “I have got three daughter” that has a concrete meaning) and different disease such are probable/possible Alzheimer’s Disease (AD), Parkinson Disease (PD), Fronto-Temporal dementia (FTD)and Vascular dementia (VD).

This observational study enrolled 396 subjects from IRCCS Centro Neurolesi “Bonino- Pulejo” of Messina, from 2016 to 2018. An interdisciplinary team included neurologist, psychologist and neuropsychologist. Neuroimaging (Computer axial tomography CT or Magnetic Resonance Imaging MRI) and laboratory examinations were obtained for all participants. Subjects were randomly selected following these inclusion criteria: the MMSE test score>10; absence of substance abuse (including alcohol abuse); absence of serious psychiatric disorders such as major depression. Participants were randomly selected on basis of their global MMSE test’s score due to the cognitive impairment level, age, gender and divided into three groups: Control Group (CG; MMSE score>26/30), MCI Group (MCI; MMSE score<26/30 but>22/30) and Dementia Group (DG; MMSE score<22/20) (Figure 1). For this purpose, authors adopted as cut-off scores the education-adjusted means reported by Trabucchi [15]. Moreover, to better define if it could be possible to discriminate though different type of Dementia, authors sub-divided this group in four categories: AD (subjects with Alzheimer Disease; n°=49), PD (Parkinson’s; n°=51), FTD (Fronto-Temporal Dementia; n°=43) and VD (Vascular Dementia; n°=53) (Table 1). The diagnoses of dementia were based on clinical findings according to the DSM- 5 [16] and the National Institute of Neurological and Communicative disorders and stroke (NINCDS) and the Alzheimer’s disease and Related Disorders Association (ADRDA) workgroup. The diagnosis of MCI was based on criteria of the Expert Conference on Mild Cognitive Impairment [17]. Moreover, the FTD diagnosis was based on the international consensus criteria for behavioral variant of FTD [18]. The diagnostic criteria for VD required neuroradiological evidence of cerebrovascular disease [19]. Verbal Fluency was defined in terms of number of words and was also focused on semantic meaning of phrase: Abstract meaning (weather, religion, feelings etc) versus Concrete meaning (family, work ect) for a qualitative analysis. We assumed that what was written reflected patient’s reasoning, respectively Abstract Thinking (AT) and Concrete Thinking CT). 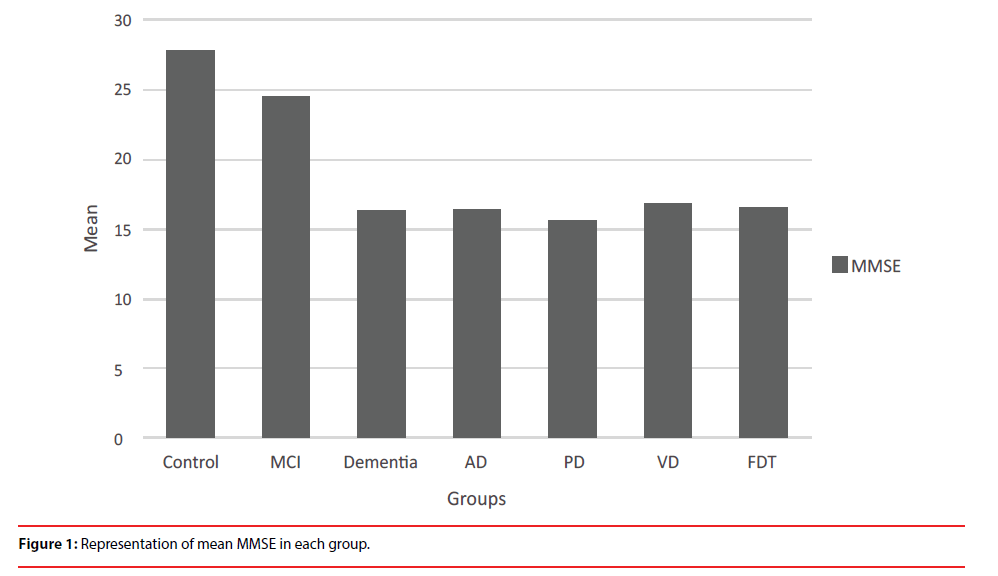 Figure 1:Representation of mean MMSE in each group.

Each participant signed an informed consent and the study was approved by the local Ethics Committee in accordance with the ethical standards of the Declaration of Helsinki.

Continuous variables were expressed as Mean ± standard deviation, whereas categorical variables in frequencies and percentages. A nonparametric analysis was carried out because the results of the Shapiro normality test indicated that most of the target variables were not normally distributed. The numerical data are presented in median, and first-third quartile in no normal distribution. For inter group analysis, the X2 test was used to compare dichotomous variables (abstract thought and concrete thought) between groups, whereas, the Mann-Whitney U was used to compare MMSE score between groups. For intra group analysis, correlations between MMSE score and number of words were computed by Spearman’s coefficient. The statistical relationship between MMSE score and abstract and concrete thought (dichotomous variables) was evaluated by the point-biserial correlation coefficient respectively. Analyses were performed using an open source R3.0 software package. A 95% of confidence level was set with a 5% alpha error. Statistical significance was set at p<0.05.

Recently, the increasing of elderly people with a neurodegenerative pathology have brought Neuroscience and Clinical Neuropsychology to find more information, obtained in less time, from clinical tests like MMSE, recently validated also to be administered by videoconference [20]. Several studies showed the value of MMSE, to better define the limit between normal aging and pathology, as shown in global outcome result, or its sensitivity to discriminate a deficit in a cognitive domain. Lo Buono et al. used MMSE not only for disease’s degree evaluation, but also to discriminate different types of Dementia’s performances. They discovered that VD patients showed more accuracy errors and graphic difficulties than AD patients, underlying a particular vulnerability of visuo-constructive functions in VD compared with AD [21].

In this study, we observed and detected significative difference among CG, MCI and DG and MMSE score. This confirms that MMSE is useful to evaluate normal and pathological aging such as MCI.

No significant association between Sentence Writing section of MMSE and its overall outcome score was found. This result confirms Yan Press et al. findings but disconfirms Mc Carthy’s et al. [22]. These authors examined features of writing that might be related to functional outcomes and as the Sentence Writing in the MMSE could provide informations about cognitive status. In fact they and found a relationship between the content and the structure of the sentence and the overall MMSE score.

Furthermore, a significant association between CT phrases in DG has been found: MCI group and Dementia, AD, VD and PD and FTD respectively. These findings suggest that the progression from MCI to Dementia could led to a progressive loss of AT, and a tendency towards CT in writing [23]. One other study showed that memory, constructive ability and AT was particularly impaired in MCI individuals compared to controls [13]. Hughes et al. noticed that AD severity is correlated with difficulties in writing (agraphia or dysgrafia), deterioration in spelling, poor narrative organization, content word errors and perseverations. In addition, reduced syntactic complexity and shorter sentence may occur [24].

As shown in Intra-Group analysis, significant correlations have been reported between: MMSE overall score and Number of Words written in Sentence Writing in FTD Group and VD Group. A previous study investigated the relationship between aspects of the MMSE sentence (n° of words) and the overall MMSE score and found that total MMSE score correlated with number of words, legibility and “emotional tone” of sentence (Positive, negative and neutral) [25]. This finding is in accord with Jefferson et al. in fact these authors showed that lower scores were obtained in Motor-Constructional section, Working memory, Intersecting pentagons and Sentence production in VD patients, while AD patients showed differential impairment on MMSE indices [14].

This result is in contrast with the findings reported by Shenkin et al. who did not find an association between Number of Words and diagnosis [26].

Finally, we highlighted a significant positive correlation in CT and MMSE score especially in PD group. These patients show great difficulties in everyday life activities caused from the loss of planning ability: they have difficulties to find the best strategy to execute an intellective or motor task. Levy et al. in 2002 found a significant abstract reasoning deficit in PD, and this is confirmed by our findings. This kind of deficit led the patient to analyze only concrete and simple aspects of everyday life, and MMSE sentence writing could help in this direction as a useful tool for a differential diagnosis in dementias [27].

MMSE provides a comprehensive cognitive assessment for global cognitive impairment. Otherwise, MMSE sections, reflecting various cognitive domains, could assess important information’s about neurodegenerative progression of dementia. Number and sense of words of MMSE sentences (abstract/concrete) seems to be an important clinical marker. MMSE, that could suggest the presence of a MCI or a Dementia, can be useful for a better and more complete evaluation on a long-term care setting. In addition, the analysis of changes in MMSE sentence writing, could provide a predictive evaluation of a future cognitive decline.

Authors declare there is no conflict of interest.