Relationship between Schizophrenia and Low-Income Based on Age and Sex: Results from a Nation-wide Population-Based Longitudinal Study

The aim of this study was to examine the relationship between low-income and schizophrenia among the Taiwanese population.

Persons who reside in Taiwan for over 6 months are required to enroll in the National Health Insurance (NHI) program. The NHI Bureau transfers all health insurance data to the National Health Insurance Institute (NHRI). The primary data source of this study is the National health Insurance Research Database (NHIRD) which contains detailed healthcare data of approximately 99% of the general population. Within the NHIRD are the 2005 and 2010 Longitudinal Health Insurance Datasets (LHID) which contain claim data of approximately 2 million randomly sampled individuals. The LHID contain integrated medical records of the sampled individuals from 2001-2010. Lowincome was defined as having family income less than 20,000 NTD (New Taiwan Dollar) per month. We identified low-income individuals that were free of schizophrenia during the period 2001-2003. The same individuals (that is, low-income individuals that did not have schizophrenia previously) were reviewed from 2004–2010 to ascertain schizophrenia positive diagnosis, and the relationship to gender and socioeconomic status.

The clinical diagnosis of schizophrenia was based on the International Classification of Diseases, Revision 9, Clinical Modification (ICD-9-CM) code 296.XX. Exclusions included the following: (1) Individuals who were diagnosed with schizophrenia from 2001 to 2003 (n = 8,744). (2) People whose income fluctuated or changed (that is, from non-low-income to low-income) during the period 2004 to 2010 (n = 20,689). (3) Individuals whose demographic data were incomplete (n=74). The final participants included 1,773,693 individuals (1,758,595 from non-low-income and 15,098 from lowincome households). In general, 4,672 people were identified with schizophrenia from 2004 to 2010. The Institutional Review Board of Chung Shan Medical University Hospital approved this study.

Chi-square tests were used to analyze nominal variables and to compare the proportion of low-income and non-low-income individuals. Cox proportional hazards regression model was used to determine the hazard ratios (HRs) of schizophrenia. Adjustments were made for geographic location and urbanization level. The attributable risk percent (AR%) of schizophrenia was also determined. We used p < 0.05 and 95% confidence interval (CI) to define statistical significance. All analyses were performed using the SAS 9.3 statistical software (SAS Institute, Cary, NC).

Table 1: Demographic characteristics of study individuals recruited from 2001 to 2003.

Table 2: Incidence rate of schizophrenia among the study participants (2004 to 2010). 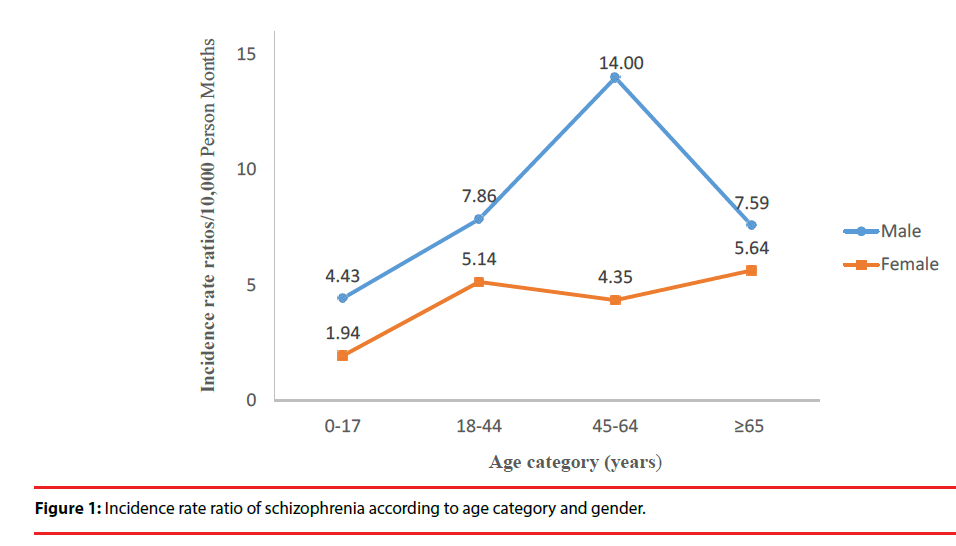 Figure 1: Incidence rate ratio of schizophrenia according to age category and gender. Similar results have been found in previous publications [12,13]. Among the low-income group, the incidence ratios of schizophrenia (men to women) were approximately 2.29, 1.87, 2.18, in the 0-17, 18-44, 45-64 age groups, respectively. It is worth stating that the incidence rates were significantly higher in men compared to women, with a peak at age 18-64 years. This shows that this age category may serve as a target group in the prevention of schizophrenia. Nonetheless, another study has reported a peak onset occurring typically between the ages of 15-25 [14]. The higher incidence observed in men is an indication that the diseases is expressed differently between sexes [15].

A number of studies have found strong associations between low-income and mental disorders [16-19]. Our observations align with previous findings although age and sex were not included in their analyses [9,10]. Inconsistent results have also been reported [11]. In a cross-sectional study of the first episode of schizophrenia among persons aged 16 to 35 years, low-income did not predict the incidence of schizophrenia [2]. The inconsistent results reported in previous publications cited above may partly be linked to the role of economic stressor, malnutrition, obstetrical complications, violence, family dysfunction, social deprivation, social adversity, and a decrease capacity to obtain good health care [9,10,20,21].

Two principal causal pathways (social causation and social drift) have been suggested for the development of schizophrenia [22]. A previous study found that the first admission with schizophrenia was concentrated among lower socio-economic areas of Chicago [2]. This has been consistently replicated by other studies [22,23]. However, another study found no difference in the incidence of schizophrenia based on social class [24]. Other studies have associated higher social class at birth with increased risk of schizophrenia [25,26]. Taken together, there are some discrepancies between the social class and factors related to schizophrenia. This may be due to differences in the samples, methodology, and diverse meaning of social class in different generations. Generally speaking, genetic and environmental factors are essential in the etiology of schizophrenia [27]. Environmental factors can affect gene expression. In this Taiwan-based study, poverty is identified as a significant risk factor. This aligns with previous investigations as noted earlier. A comprehensive socioeconomic status measures economic and sociological issues of individual or household income, education, and occupation in relation to others. Interestingly, we focused on low-income as a modifiable factor for schizophrenia [28]. Understanding the etiology of the disease is relevant to affected persons. An integrated approach to poverty reduction would be essential in preventing the onset or progression of this disease among low-income groups.

Schizophrenia is one of the most disabling medical disorders in the world [29]. It has been reported that 45.8% (95% CI = 36.1%-55.5%) of patients with schizophrenia were individuals with low socioeconomic status [8]. However, in the analyses, the AR% was not determined based on sex and age. In the present study, higher values of AR were observed in all individuals regardless of their gender and age group. This is similar to findings that have been previously reported [8].

In order to prevent schizophrenia, we may have to move from the epidemiological horizon to the public health foreground [28]. Lund et al. found that mental health effect of poverty alleviation interventions was inconclusive, although some conditional cash transfer and asset promotion programs had mental health benefits [30]. Additionally, Costello et al. reported that family income supplements in adolescence were effectively associated with a decreased risk of some mental disorders [31].

Our study has a number of strengths and limitations. First, it is the first population-based longitudinal study to confirm a relationship between low income and schizophrenia using a large sample size. Unlike most previous studies, we analyzed samples by sex and age group. As a limitation, we could not control some of the confounders such as other socioeconomic factors, comorbidity, and mental disorders. Second, diagnoses of schizophrenia in the NHIRD are based on clinical examinations by physicians, and hence may have been less reliable than those established through a structured diagnostic interview by trained researchers.

In this study, we found that low-income men had higher incidence rates of schizophrenia compared to women under 65. Overall, lowincome individuals had higher incidence rates compared to non-low-income individuals in all age groups and both sexes. Based on these findings, low-income is a risk factor for schizophrenia regardless of gender. Our study has substantial policy implications and the findings suggest the need for poverty alleviation interventions to support, especially low-income men aged 18-64 who appear to have a higher risk of developing schizophrenia.

Authors declare that they have no competing interests.