Valproic acid (VPA) is used as a treatment for individuals with epilepsy, migraine, and psychiatric disorders such as bipolar disorder. Hyperammonemia has been reported to be associated with patients treated with VPA. Here we investigated the relationships among plasma ammonia concentrations, VPA dosages and plasma VPA concentrations, and we attempted to identify the factors associated with VPA-induced hyperammonemia.

This was a retrospective chart-review investigating inpatients at The University of Occupational and Environmental Health, Japan (UOEH) Hospital from September 2003 to March 2014. We examined the cases of 430 inpatients. The patients’ diagnoses of schizophrenia, mood disorder and other psychiatric disorders were based on the DSM-IV-TR criteria. The upper normal limit of plasma ammonia is 54 μg/dl according to our hospital’s reference; we defined hyperammonemia as a plasma ammonia level above this value. We examined the correlations among the VPA dose, plasma VPA concentrations and plasma ammonia concentrations. We used Pearson’s correlation coefficient to examine the relationship between pairs of variables and performed a multiple regression analysis to identify variables that were associated with the plasma VPA concentrations and with the plasma ammonia concentrations.

We identified a high frequency of hyperammonemia among asymptomatic patients receiving VPA. Because asymptomatic hyperammonemia can potentially induce ammonia neurotoxicity, patients being treated with VPA should be monitored closely, especially if they have clinical symptoms and risk factors.

Valproic acid (VPA) is broadly used in the treatment of neuropsychiatric disorders, and it is also prescribed for epilepsy, migraine, and mood disorders. The commonly adverse events associated with VPA treatment are fatigue, gastrointestinal disturbances, weight gain, tremor, hair loss, thrombocytopenia, and an increase in hepatic enzymes. Hyperammonemia has also been reported to be associated with VPA treatment [1]. Hyperammonemia induced by VPA may be an important clinical consideration, especially when associated with liver disease or encephalopathy. The reported frequency of hyperammonemia induced by VPA ranges from 16.2% to 83.3% [2-4].

This study was a retrospective investigation of the cases of the 430 in-patients treated with VPA for a psychiatric disorder at The University of Occupational and Environmental Health, Japan (UOEH) Hospital in the 10.5-year period from September 2003 to March 2014. According to the following criteria, 139 inpatients were eligible for the present analysis (Figure 1): i.e., they were 13–55 years old; they were prescribed VPA; and their plasma VPA concentration and plasma ammonia concentration were monitored. Patients co-administered lamotrigine, phenobarbital, carbamazepine, and topiramate because of altering plasma VPA concentration were not selected for the study. The study protocol was approved by the Ethics Committee of The University of Occupational and Environmental Health. The patients had been diagnosed with schizophrenia, mood disorder and other psychiatric disorders based on the DSM-IV-TR (Diagnostic and Statistical Manual of Mental Disorders, 4th Edition, Text Revision) criteria (Figure 2). 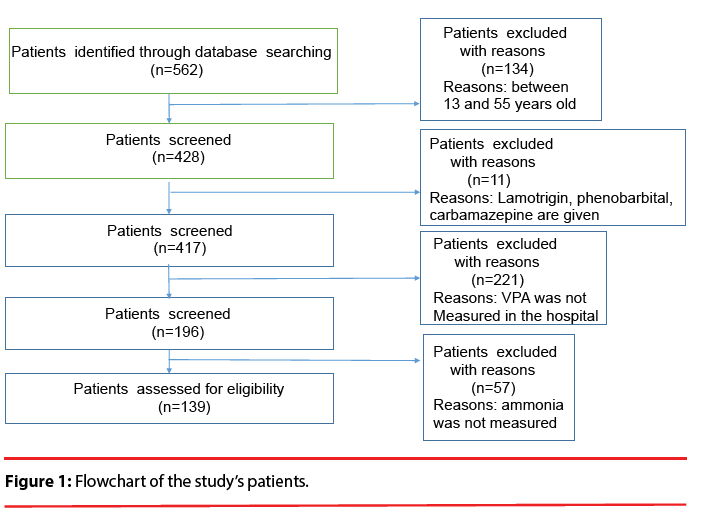 Figure 1: Flowchart of the study’s patients. 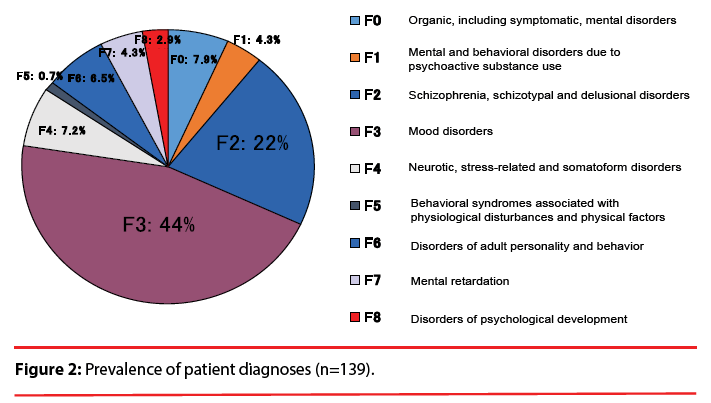 The VPA and ammonia concentration in each patient’s blood was measured at UOEH Hospital. Plasma VPA concentration was measured by using high-performance liquid chromatography according to Zhang et al. [9]. In brief, the method was based on derivatization of VPA using 2-bromo-2′-acetonaphthone as a new derivatization reagent. Caprylic acid was used as an internal standard. Under the optimized extraction and derivatization conditions, the method showed good linearity in the range of 0.05–200 μg/mL and the limit of detection was as low as 0.01 μg/mL. The normal range of plasma ammonia is 15–54 μg/dl according to the hospital’s standard. We defined hyperammonemia as a plasma ammonia level above 54 μg/dl. The coadministered drugs are summarized in Figure 3. We calculated the antipsychotics dose using the chlorpromazine equivalent scale, the antidepressant dose using the imipramine equivalent scale, and the dose of concomitant anxiolytics and hypnotics using the diazepam equivalent scale [10]. Figure 3: Prevalence of antidepressant drug use (n=40). Forty of the 139 patients used antidepressants. The average dose was converted into imipramine.

Of the 430 hospitalized patients, 139 patients were eligible (Figure 1). There were 90 females (64.7%) and 49 males (35.3%). The average age was 36.4±11.8 years (Table 1). We identified 84 (60.4%) of the 139 patients as hyperammonemic. None of these 84 patients were symptomatic, and no hepatotoxicity was found. As illustrated in Figure 2, the psychiatric diagnoses distribution was as follows: 44% (61 cases) were mood disorders, 22% (31 cases) were schizophrenia, schizotypal or delusional disorders, and the remaining third of the cases were various psychiatric disorders including epilepsy. 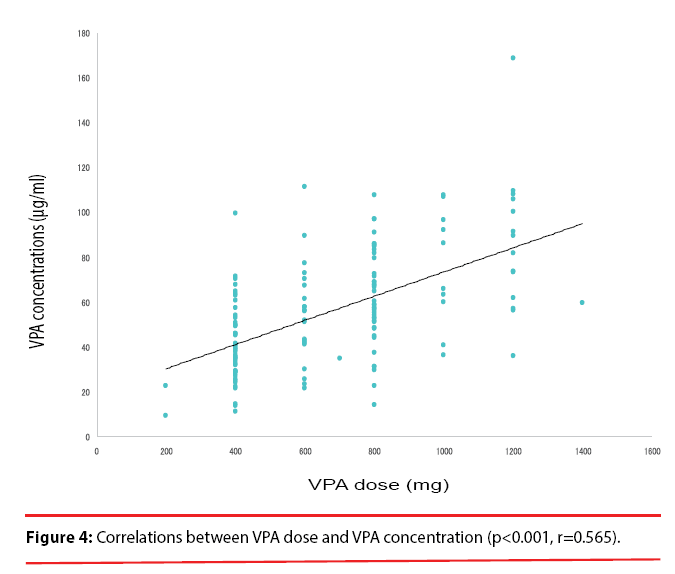 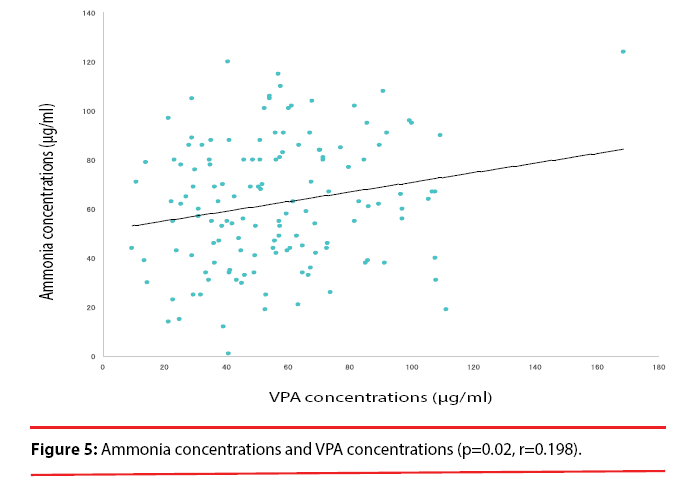 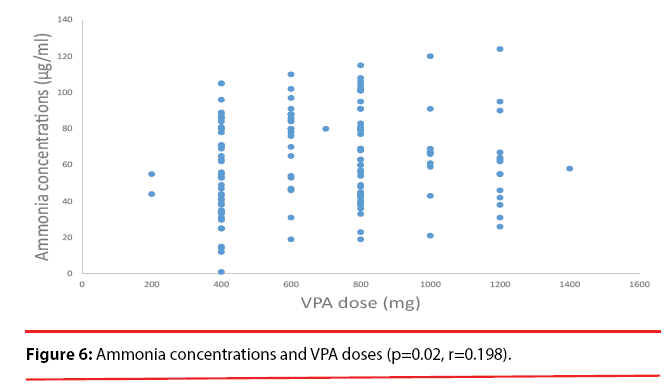 The results of the regression statistical analysis are shown in Table 1. The independent variables were as follows: age, antipsychotic dose, antidepressant dose, benzodiazepine dose, gender, VPA dose, VPA concentration, albumin (Alb), aspartate aminotransferase (AST), alanine aminotransferase (ALT), blood urea nitrogen (BUN), creatinine (Cre), triglyceride (TG), total cholesterol (T-cho), and body mass index (BMI). According to the multiple regression analysis, the variables that were associated with the plasma VPA concentration were female and the VPA dose (Table 2). The variables that were associated with the plasma ammonia concentration were the antidepressant dose and the plasma VPA concentration (Table 3).

Two studies [6,7] of Japanese epilepsy patients showed that risk factors for hyperammonemia associated with VPA were VPA dose, female gender, and the concomitant use of phenytoin, phenobarbital, or topiramate. VPA was used over 40% of the present study’s subjects for a mood disorder, schizophrenia, or organic (including symptomatic) mental disorders (Figure 2). VPA was generally used broadly as a mood stabilizer combined with an antidepressant or antipsychotic. Antidepressants were most prescribed (28.8%), especially SSRIs, as the combination drug with VPA (Figure 3). Some antidepressants such as amitriptyline and fluoxetine prolong the half-life of VPA or increase VPA concentrations [13-15]. We observed that the co-administrated antidepressant was associated with plasma ammonia levels, but not the plasma VPA levels (data not shown). We were unable to determine which antidepressants interact with VPA because of the relatively small number of patients examined, and further studies are needed regarding potential interactions of VPA with antidepressants.

Our study has several limitations. First, the study was conducted to investigate the correlations among VPA doses, VPA concentrations and ammonia concentrations in the blood, but the patients’ diagnoses were not confirmed due to the retrospective design of the study. Second, most of the patients took antidepressants and/ or VPA, which might have influenced the results via pharmacokinetic and/or pharmacodynamic pathways. Third, we did not measure free VPA concentrations. Our findings regarding total VPA concentrations and the VPA doses should be interpreted with caution in light of the ceiling effect due to saturation of plasma protein binding.

The authors declare that they have no conflicts of interest regarding the publication of this paper.