To investigate the relationships between orthostatic hypotension (OH) and the risk of AD using meta-analysis.

The PubMed, Sciencedirect and Web of Science were searched to identify relevant literature published up to October 2016. The RevMan 5.3 software was used for statistical analysis, with odds ratio (OR), risk ratio (RR) and 95% confidence intervals (CI) calculated to evaluate the associations between OH and the risk of AD. Meta-regression and publication bias were also performed.

This meta-analysis showed that OH may be a risk factor for susceptibility to AD. Large-sample multicenter studies are needed to confirm the findings.

Alzheimer’s disease (AD), an age-related progressive neurodegenerative disorder, is clinically characterized by non-reversible impairment of memory and by disturbances in reasoning, planning, language, and perception [1]. The incidence of AD increases substantially after the age of 60. With the coming of aging society, the prevalence of AD also increases rapidly [2,3]. The importance of identifying risk factors is therefore evident in the prevention and treatment for AD. In the past decades, abundant in-depth epidemiologic studies have been performed to understand the pathogenesis of AD, many of which indicated that autonomic nervous system (ANS) plays an important role in the development of AD [4,5].

ANS has two main divisions: sympathetic autonomic nervous system (SANS) and parasympathetic autonomic nervous system (PANS). Most organs are controlled primarily by either SANS or PANS. The two divisions work cooperatively to ensure that the body responds appropriately and accurately to different stimulation [6-8]. ANS regulates several basic functions, such as blood pressure, heart and breathing rates, body temperature, digestion, gland secretion (saliva, sweat, and tears), urination, defecation and sexual response. Autonomic dysfunction occurs when the ANS are out of order. Autonomic dysfunction (also called autonomic neuropathy or dysautonomia) may being involved with a small part of the ANS or the entire ANS. The symptoms can range from mild to life-threatening, including orthostatic hypotension, heart rate variability, sweating abnormalities, digestive difficulties, urinary and sexual problems [9,10]. Orthostatic hypotension (OH) is one of the most common presentations of autonomic dysfunction [11]. Increasing results indicate strong associations between OH and the prevalence of cognitive impairment and dementia [12-16]. OH has often been observed to be a risk factor for Alzemer’s dementia [17,18]. This meta-analysis aims to demonstrate the association between OH and the prevalence of AD and identify the impacts of OH on AD. Accordingly, OH is considered a potential cause of AD.

The following index and databases were included in the identification of relevant studies: PubMed, Sciencedirect and Web of Science. Search terms included Alzheimer’s disease and autonomic nervous system or autonomic dysfunction or dysautonomia or low blood pressure or orthostatic hypotension. The titles and abstracts were first reviewed to find potentially relevant papers. The uncertain paper was reviewed with full text. The literature search procedure was conducted in English. English articles published from January 1987 to October 2016. This metaanalysis was carried out in accordance with the Preferred Reporting Items for Systematic Reviews and Meta-Analyses (PRISMA) [19,20].

Clinical studies were included in this metaanalysis if they were clinical cross-sectional studies, case control, cohort studies or randomized controlled trials. The diagnosis criteria of Alzheimer’s disease conformed with the ICD-10 and DSM-IV for dementia, and was a diagnosis of probable AD according to the NINCDS-ARDA criteria proposed by the National Institute of Neurological and Communicative Disorders and Stroke and the Alzheimer’s Disease and Related Disorders Association (NINCDS-ARDA). Clinical OH is diagnosed with an decrease in systolic and/or diastolic blood pressure (minimum of 20 and 10 mmHg, respectively) within 3 minutes of standing from a supine to an erect position [14,21].

This meta-analysis was performed with Review Manager 5.3 (RevMan 5.3) software. The multivariate outcome data (OR, RR and 95% CI) were transformed logarithmically. Potential heterogeneity among the individual studies was evaluated by means of Cochran’s Q statistic and I2 index score, with a significance set at the P-value<0.1 or I2 <50%. Potential publication bias was evaluated using Egger’s test and Begg’s funnel plot.

Figure 1 implicates the relevant study search process. 3,860 articles were identified with the described search strategy, from which 52 fulltext articles were retrieved for final review after screening 1,981 items by titles and abstracts (Figure 1). 1,879 duplicate items were first removed. After reading the 52 full-text articles, 35 items were removed due to no control cases, and 10 items excluded because of no RR/OR materials, and 2 items were removed because they had no direct aim at OH research. Finally, 5 studies were included in this meta-analysis [12,22-25] (Table 1). Figure 2: Forest plot for the associations between OH and AD risk (OR and RR and 95% CI). OH: orthostatic hypotension. 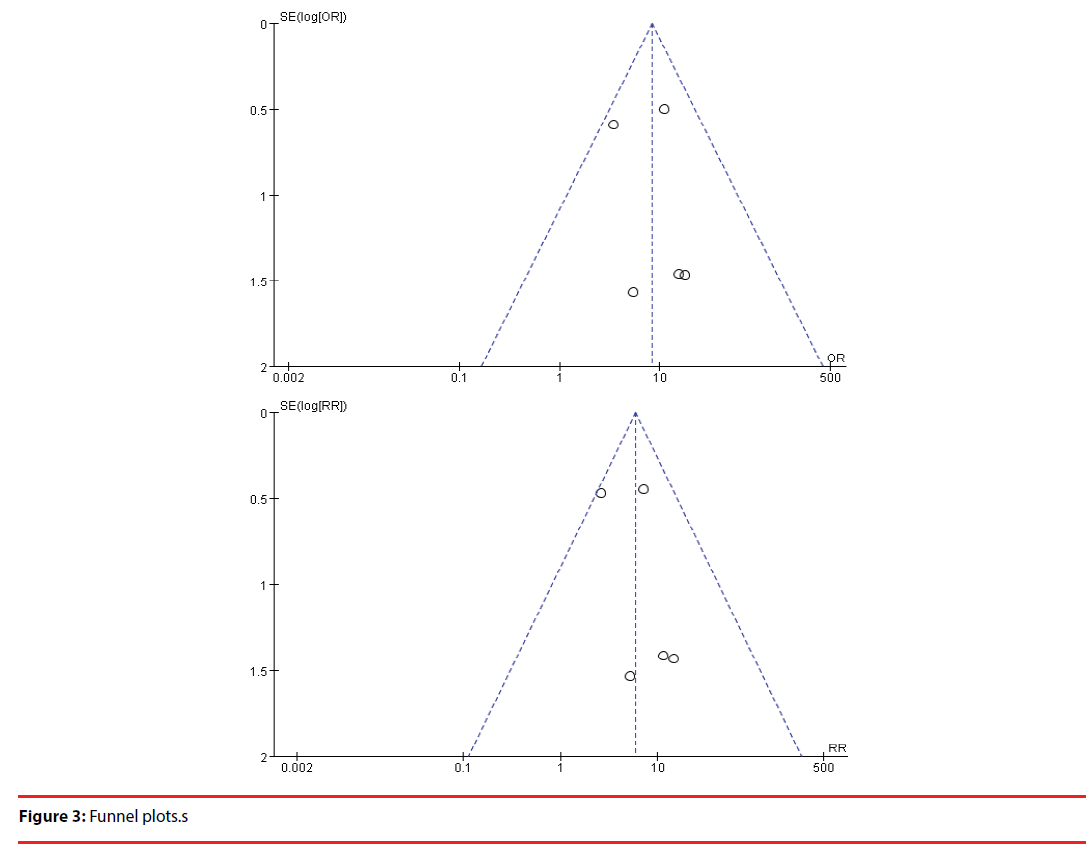 Orthostatic hypotension (OH) is the most common clinical manifestation in autonomic dysfunction. Multiple research investigations support the role of autonomic dysfunction in the pathogenesis of cognitive impairment and dementia, which seemed similar for AD and vascular dementia [14,26]. The aim of this meta-analysis is to investigate the relation between OH and AD. In this meta-analysis, a statistically significant association between OH and increased AD risk was found, implicating that OH is a potential risk factor for Alzheimer’s dementia.

The signs of dysautonomia in patients with AD were reported by inclding OH, impaired heart rate variability (HRV), constipation and urinary incontinence, clinically characterized by the intensity of mild dysautonomia [25,27,28]. It has been suggested that impaired HRV may be an early sign of AD [28,29]. It was found that OH enhanced long-term risk of developing dementia [14]. Meanwhile, individuals with some dementia-related neurodegenerative disorders possess a greater-than-normal risk of developing OH [30,31]. Allan et al. found that high risk for OH existed in the elderly people with dementia, including AD, vascular dementia, Parkinson disease dementia, and dementia with Lewy bodies [22]. A comprehensive background is that OH is a common cause of cerebral hypoperfusion which is widely implicated in the contribution to cognitive decline and dementia [32-34]. Compelling studies support that OH’s effects on AD may be related to changes in brain blood flow or disruption of blood-brain barrier integrity, while OH results in changes in arterioles and eventually onset of cognitive impairment and dementia [26,35,36]. However, this meta-analysis had no further work to discover the pathogenic role of OH in the occurrence and development of AD.

Several limitations existed in this meta-analysis although there was no publication bias. First, unknown confoundings cannot completely be ruled out since other signs and symptoms is in association with OH, such as light-headedness, vertigo, syncope, generalized weakness, nausea, posterior headache and blurred vision. These patients with OH may be more likely to have other signs of dysautonomia, such as HRV, constipation and urinary incontinence [37,38]. Secondly, a further layer of analysis was not performed due to the small size eﬀect and limited number of included studies. Thirdly, no clinical studies included in this meta-analysis contained treatment data, so it could not be determined whether rectifying OH was an effective measure for the prevention and treatment of AD. Finally, large-sample multicenter research data has been absence until now, and the included studies did not record the severity of OH, the accurate relation between OH and AD is uncertain. Therefore, further analysis is needed to determine the role of OH in AD.

In summary, findings from this meta-analysis of published case-control and cohort studies suggest a strong association between OH and increased AD risk, implicating that OH is a potential risk factor for Alzheimer’s dementia. Future clinical studies are needed to confirm these findings.

This work was supported by the Chongqing Health and Family Planning Scientific Research Project (ZY201702042), and the Nature Science Foundation of Chongqing General Hospital to Dr. Zhiyou Cai.