The study aimed at identifying mortality and risk factors of psychiatric inpatients with dementia, a 13-year long-term data analysis.

Among 320 dementia patients, a total of 83.4% had Alzheimer disease and 16.6% had vascular dementia. The mortality rates within 1 year after admission were reported for patients with vascular dementia (41.7%) and patients with Alzheimer disease (19.1%). A 1-year increase in age was associated with 3% increase in the risk of hospitalization mortality. Mortality risk among male inpatients was 2.9 times higher than that of female inpatients (P<0.001). The mortality risks among delirium inpatients, those with delusional symptoms, and those with depression had hazard ratios of 2.84 (P=0.004), 2.17 (P=0.008), and 1.82 (P=0.075) respectively, relative to inpatients with uncomplicated symptoms.

The factors that influenced the mortality of dementia patients admitted to the psychiatric department were male sex, old age, delirium symptoms, and delusional symptoms.

Worldwide, approximately 47 million people have dementia, and this number is expected to increase to 131 million by 2050. The worldwide cost of dementia is US$818 billion [1]. According to the demographic statistics released by Taiwan’s Ministry of Interior in September 2017, 243,430 people aged 65 years or older have dementia; they account for 1.09% of the total population in Taiwan, which means that one in every 100 people in Taiwan has dementia [2].

Dementia is generally degenerative and vascularbased in nature. The most common forms of dementia are Alzheimer disease (AD) and vascular dementia (VaD) [3-5]. According to the Diagnostic and Statistical Manual of Mental Disorders (4th Edition Text Revision) (DSM-Ⅳ- TR), dementia is classified by its primary clinical symptoms of accompanying uncomplicated symptoms, delirium, delusions, and depression [4]. Dementia is a combination of symptoms that causes deterioration in memory, language ability, spatial orientation, calculation ability, judgment, abstract thinking ability, and attention. It also leads to behavioral disturbances and personality change, influencing interpersonal relationships and the ability to perform daily living activities [6]. More than 90% of people with dementia develop at least one behavioral or psychological symptom such as sleep problems, paranoia and/or delusions, diurnal disturbance, and aggressiveness during the course of the disease [5,7,8]. Behavioral and psychological symptoms of dementia (BPSD) inflict pain on patients and impose considerable burden on the patients’ caregivers and families as well as the society [9,8]. Severe BPSD requires hospitalization for treatment [10], and the primary reasons patients with dementia are admitted to psychiatric wards include defiant behavior (physically or verbally aggressive behavior), hyperactivity (wandering, restless, or repetitive behavior), or apathy and/or depression (loss of appetite, refusal to eat, refusal to take medication, or suicide) [11,12].

The National Health Insurance (NHI) was implemented in Taiwan on March 1, 1995. The NHI coverage rate is currently more than 99%, covering almost every citizen in Taiwan. Therefore, the NHI database is a representative database containing empirical data that can be used by medical health care communities. The research outcomes obtained using the database can serve as the basis for medical health care policies. In this study, data were sourced from the Longitudinal Health Insurance Database 2005 (LHID 2005) of the National Health Insurance Research Database (NHIRD). LHID 2005 contains the insurance claims data of one million beneficiaries randomly sampled from the NHIRD in 2005. The NHI report showed no significant difference regarding gender, age, and insured salary in the LHID2005 and NHIRD, suggesting that the data in LHID 2005 can represent the parent population. The LHID2005 contains demographic information, hospital admission records, and treatment procedures undertaken. The International Classification of Diseases, Ninth Revision, Clinical Modification (ICD-9-CM) was adopted in this study. Data were pseudonymized in a pro-con analysis to protect the privacy of these patients and hence informed consent was waived. This retrospective analysis study was approved by the Joint Institutional Review Board of Tri-Service General Hospital (TSGH IRB No.2-106-05- 029). 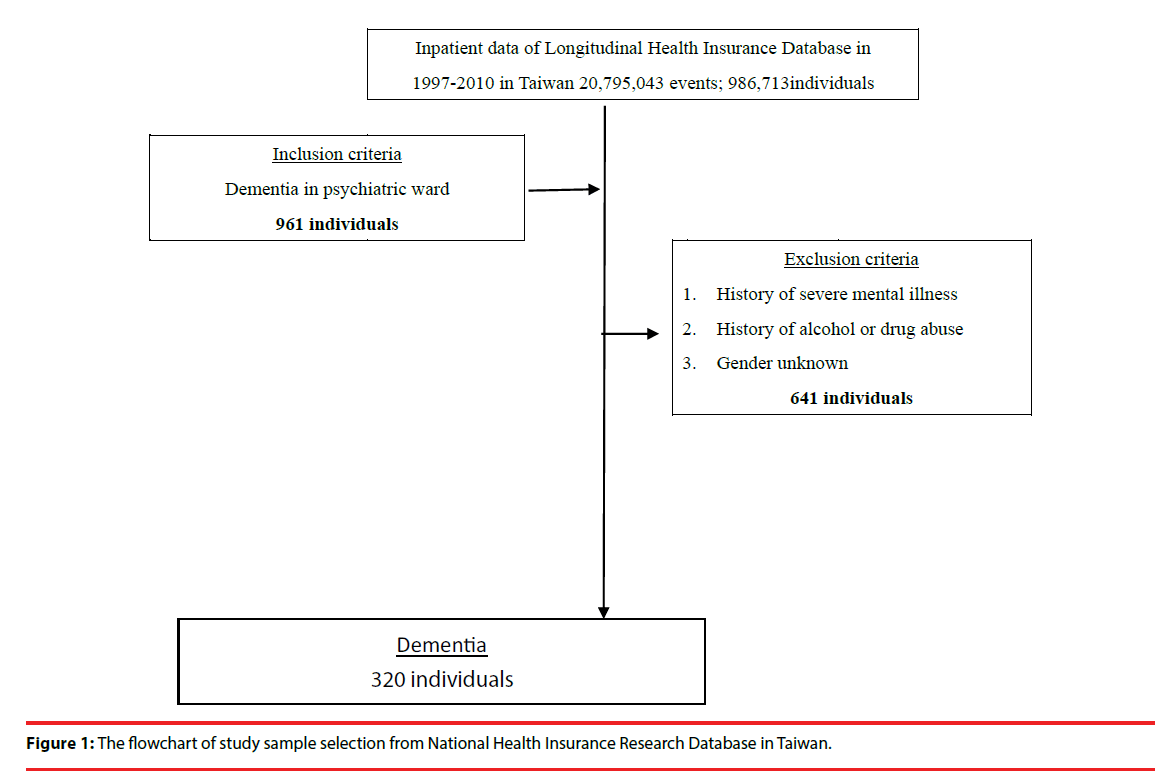 Clinical comorbidity index (CCI) scores were calculated before performing data analysis [29]. In the data analysis, continuous variable results were expressed as means and standard deviations, whereas categorical variables were expressed as numbers and percentages. Chi-square was used to analyze the difference between the categorical variables, and continuous variables were compared using one-way analysis of variance (ANOVA). Mortality risk and risk factors were assessed using Cox regression analysis. All statistical analyses were performed using IBM SPSS Statistics 22.0, with p<0.05 being defined as statistically significant.

Table 1: Social demographic characteristics of patients with dementia who are admitted to the psychiatric department (n=320).

Table 2: Social demographic characteristics of patients with dementia who are admitted to the psychiatric department (gender).

Table 3: Social demographic characteristics of patients with dementia who are admitted to the psychiatric department (type).

If cases were classified by their primary clinical symptoms into uncomplicated, delirium, delusional, and depressive symptoms and these symptoms were classified by types of dementia, AD was associated with higher rate of uncomplicated, delirium, delusional, and depressive symptoms compared with VaD. In addition, AD and VaD exhibited statistically significant difference (P=0.001). Regarding inpatient surgery, the percentage of inpatient surgery was highest among patients with depressive symptoms (22.4%) followed by patients with delusional symptoms (10.3%), and statistically significant difference was observed (P=0.020). The average length of hospital stay, medical cost, and number of times of hospitalization were the least for patients with delusional symptoms, and these factors showed statistically significant difference (Table 4).

Table 4: Social demographic characteristics of patients with dementia who are admitted to the psychiatric department (accompanying symptoms).

An analysis of 13-year follow-up data revealed that among patients with dementia admitted to the psychiatric department, these patients were hospitalized not only for BPSD treatment, but also for treatment of various diseases. The results indicated that the top five diseases leading to inpatient admissions were pneumonia (n=180/9.0%), urinary tract infection (n=127/6.4%), obstructive chronic bronchitis with acute exacerbation (n=81/4.1%), acute respiratory failure (n=64/3.2%), and unspecified septicemia (n=45/2.3%).

▪ Inpatient mortality diagnosis and distribution of time of death

According to a 13-year follow up of patients with dementia who were admitted to the psychiatric department, the top three diseases leading to inpatient mortality were pneumonia (n=32/31.7%), respiratory failure (n=25/24.8%), and septicemia (n=12/11.9%). That in a 13-year follow-up, 101 patients with dementia died during psychiatric admission. More than half of these mortality cases (55.4%) occurred within 2 years, and 96% of the patients died within 6 years. The time of death showed statistically significant differences (P=0.012). In terms of VaD and AD, the distribution of time of death also differed. Noticeably, the time of death for patients with VaD concentrated in the first three years, whereas that for patients with AD was uniformly distributed and showed no substantial difference every year. However, the time of death for patients with AD differed considerably after the sixth year, decreasing from 10.1% to 1.1% in the seventh year (Figure 2). An analysis of time of death based on the four types of symptoms showed that the mortality rate one year after admission to the psychiatric ward was the highest among dementia patients with delusional symptoms (32.6%), followed by those with delirium symptoms (17.6%). In particular, the six-year mortality rate among dementia patients with delirium symptoms and those with delusional symptoms was 100%. These results indicate that the four types of accompanying symptoms differed in terms of time of death, and that the differences were statistically significant (P=0.031) (Figure 3). Figure 2: Distribution of Time of Death in a 13-yearFollow-Up (Total and Type). Figure 3: Distribution of Time of Death in a 13-yearFollow-Up (Accompanying Symptoms).

This study used Cox regression to analyze the mortality risks and risk factors associated with patients with dementia who are admitted to psychiatric department for treatment. After the type of dementia, season, place of residence, level of care, surgery history, and CCI scores were controlled for, the results indicated that the risk factors for psychiatric admission mortality were age, gender, accompanying symptoms, and level of care. Oneyear increase in age is associated with 3% increase in risk of hospitalization mortality. Mortality risk for male inpatients was 2.9 times higher than that for female inpatients (P<0.001). The mortality risks among inpatients with delirium and those with delusional symptoms were 2.84 HR (P=0.004) and 2.17 HR (P=0.008) higher than those among inpatients with uncomplicated symptoms (Table 5), respectively.

Multiple studies have reported that BPSDs among patients with VaD were mostly depressive symptoms, followed by change in dietary behavior, sleep disorder, agitation or aggressive behavior, and delusional symptoms [3,5,37-40]. However, we found that VaD is most commonly associated with uncomplicated symptoms, followed by delusional subtype. This discrepancy is probably caused by the difference in research samples and location. Previous studies generally recruit community residents [38] and patients who visit clinics [3] and hospital inpatient departments [5,39]. Our study samples were inpatients whose symptoms and disease severity differed from those of community-based patients. Moreover, AD in our study was mostly associated with delusional symptoms (53.2%). This result is similar to previous foreign and domestic studies, which reported that the percentage of delusional symptoms was the highest among patients with AD (30–75.2%) [5,38,41].

This study determined that in addition to BPSDs, diagnoses most often leading to inpatient psychiatric treatment among patients with dementia were pneumonia and urinary tract infection. This result accords with the findings of previous studies regarding the most common reasons for admission treatment [16,42-44]. In addition, pneumonia was the foremost cause of death in our study, which is similar to the primary cause of deaths reported in previous studies [7,16,45-47]. Several studies have listed multiple factors associated with pneumoniacaused death, and these include infection and dysphagia [45,46]. Use of antipsychotic and benzodiazepine is also a risk factor of pneumonia and mortality [48,49]. Therefore, the risk of pneumonia-caused death is likely to increase after patients with dementia are admitted to psychiatric ward for treatment. Prevention of pneumonia in patients with dementia who are admitted to the psychiatric department is a crucial topic for health care professionals. For patients taking antipsychotic and benzodiazepine treatments, health professionals should adopt measures for infection prevention, encourage patients to receive pneumonia and flu vaccine, and observe conditions of dysphagia in these patients, thereby preventing and reducing the incidence of infection and lowering mortality risk.

The research limitations of this study were as follows. This study involved an analysis of NHIRD, and variables such as education level and marital status were not included in the investigation. This study adopted cross-sectional design, which allows for only an analysis of the association between different variables and not the causal relationships between them. The collected data was based on the hospitalized patients only; and therefore, no data of the patients who died elsewhere was available or analyzed.

For patients with dementia who are admitted to psychiatric department, particularly those with VaD, those with delusional symptoms, those with delirium symptoms, and families of these patients, efforts should be made to prevent respiratory infection, reduce hospitalization mortality rate, and provide BPSD treatments and relevant health education. Future studies could investigate the risks and factors associated with antipsychotic- and pneumonia-caused deaths among patients with dementia who are admitted to a psychiatric department. 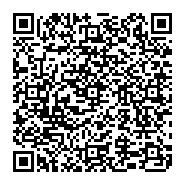