Nitrogen Oxides (NOx) has an important role in mood disorders. This study aims to investigate whether serum NOx levels are associated with bipolar disorder, manic episodes (BD-ME) and major depressive disorder, depressive episodes (MDD-DE), and to evaluate the impact of treatments on NOx levels and symptoms severity in BD-ME and MDD-DE patients.

We enrolled 20 patients with BD-ME, 18 with MDD-DE, and 80 healthy subjects. Serum NOx levels were measured with assay kits. Symptom severity was evaluated using the Young Mania Rating Scale (YMRS) for BD-ME and the Hamilton Depression Rating Scale (HAM-D) for MDDDE. We collected and analyzed patients’ NOx, YMRS, and HAM-D data while pre-treatment (admission) and post-treatment (discharge).

Our results suggest that increased levels of serum NOx are indicators in patients with BDME and MDD-DE after treatment. In addition, the changes of serum NOx levels might be measuring biomarkers for assessment of treatment response in MDD-DE patients.

Nitrogen Oxides (NOx) has been considered as a potential biomarker for diagnosis assisting. It is an important neurotransmitter involved in the pathophysiology of many neuropsychiatric disorders, such as BD, MDD, schizophrenia, and drug addiction [5-8]. Several studies have used NOx levels in the blood as biomarkers to detect BD-ME [9,10], BD with a euthymic state SS[11], BD-DE [12], and MDD-DE [13- 15]. However, the results have contradictory outcome. Furthermore, few studies have investigated the changes of NOx levels after treatment in BD-ME and MDD-DE patients, and showed unsatisfactory results [16-18].

All BD-ME and MDD-DE patients in the psychiatric inpatient ward of Kaohsiung Chang Gung Memorial Hospital were enrolled. They met the Diagnostic and Statistical Manual of Mental Disorders, Fourth Edition (DSM-IV) criteria for BD-ME and MDD-DE, and were diagnosed by psychiatrists. Background data including gender, age, weight, height, and body mass index (BMI) were recorded. Serum NOx levels at pre-treatment (admission) and posttreatment (discharge), and during hospitalization were collected. The severity of manic symptoms in BD-ME and depressive symptoms in MDDDE were evaluated using the YMRS1 and the 17- item HAM-D [2,19], respectively. Severity was assessed at pre-treatment and post-treatment. All patients were aged from 18 to 65, and underwent blood pressure, routine blood tests, electrocardiogram (EKG), and chest X-ray at admission. Those with currently unstable physical problems, a history of heavy smoking, or a history of substance abuse were excluded. Twenty-three BD-ME patients and 21 MDDDE patients initially were enrolled. They were treated with antipsychotic agent, mood stabilizer, and antidepressant according to their symptoms. The dosage of medications was titrated to treatment dose within 2 weeks, and then maintained to date of discharge. Three BD-ME patients and 3 MDD-DE patients dropped out of the study; the remaining 20 BD-ME patients and 18 MDD-DE patients were included.

The healthy controls were recruited at Kaohsiung Chang Gung Memorial Hospital. Similar background data were collected. Those with a history of mental disorders or severe medical disease were excluded. All the controls were free of medication. Eighty individuals finally were included in this study.

The study was carried out at Kaohsiung Chang Gung Memorial Hospital from November 2012 to October 2014, and was approved by the Institutional Review Board of the hospital and performed in accordance with the Declaration of Helsinki and Good Clinical Practice guidelines. All subjects signed informed consent forms after receiving a full explanation of the study.

Venous blood samples were collected in the morning after overnight fasting (at least 8 hours). The serum samples were separated by centrifugation at 3000 g for 10 min, and then stored at −80°C for further analysis soon after blood pumping. A nitrate/nitrite colorimetric assay kit was used to assay serum NOx (Cayman Chemical Company, Ann Arbor, USA). All analyses were performed at the same laboratory and according to the manufacturer’s protocol. The website of the protocol was https://www. caymanchem.com/product/780001.

Continuous variables were expressed as mean ± standard deviation. The Kolmogorov-Smirnov test was used for normality. The independent samples t-test was used to compare patient and control data that were normally distributed, and the Mann-Whitney U test was used for data that were not normally distributed. Analysis of covariance (ANCOVA) was used to compare the serum NOx levels at pre-treatment between patients and controls while controlling for the gender, age, and BMI. Paired samples t-test was used to analyze the changes of serum NOx levels, YMRS scores and HAM-D scores in the patients. Pearson’s correlation coefficient was used to evaluate the relationship between serum NOx levels and YRMS scores or HAM-D scores. A p value of less than 0.05 was used to indicate statistical significance. All data were analyzed using MedCalc Statistical Software version 16.2.0 (MedCalc Software bvba, Ostend, Belgium; https://www.medcalc.org; 2016).

Table 1: Characteristics of BD-ME patients, MDD-DE patients, and healthy controls in the study.

Table 2: Medications used by the BD-ME patients and MDD-DE patients in the study.

Table 3: Mean changes in NOx levels, and YMRS and HAM-D scores of BD-ME and MDD-DE patients after treatment. 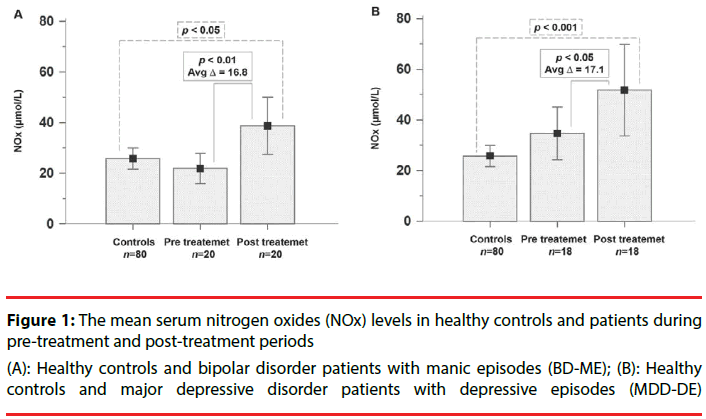 The changes of serum NOx levels and YMRS scores in BD-ME patients after treatment showed no significant correlation (r=-0.1831, p=0.4396) (Figure 2A). However, a significant correlation was noted between changes of serum NOx levels and HAM-D scores in MDD-DE patients after treatment (r=-0.4732, p=0.0473) (Figure 2B). 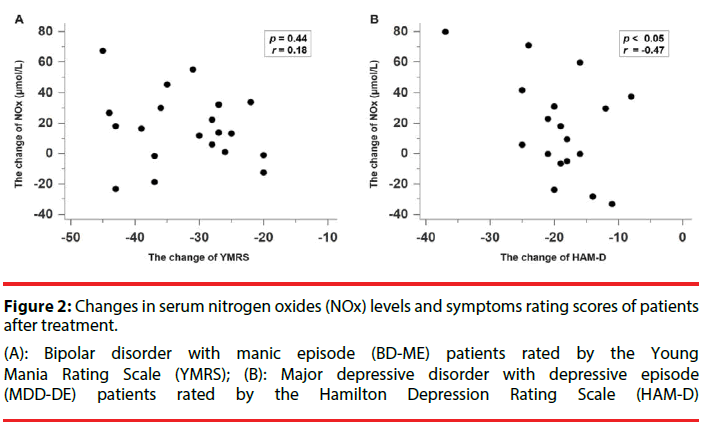 However, a study by Ozcan et al. found decreased plasma NOx levels in the pre-treatment bipolar patient group compared to the control group [10]. Differing from previous findings, our study showed no significant differences between BD-ME patients and controls. The reasons for the discrepancy might be differences in race, in sample sizes, and in severity of BD-ME.

The role of blood NOx levels in MDD-DE has been debated since the 2000s. Some studies proposed that blood NOx levels had a positive association [13,17,21-27], others suggested no significant association [18], and still others reported a negative association with MDD-DE [14,15,28,29]. Our study found higher mean serum NOx levels in MDD-DE patients than in healthy controls, but without a significant difference. These discrepancies might be the result of differences in case heterogeneity. For instance,patients in some studies had comorbid physical disease (colorectal carcinoma or leukemia) [26,27] or other psychiatric disorders [14,18,28]; some had been diagnosed with a first episode of MDD [13,21,29] or had recurrent depressive episodes of MDD25, or had attempted suicide [22,23]; one study enrolled only female groups [15], and another only Han Chinese subjects [17]. Our study population was purely mood disorder without major physical problem, but we didn’t distinguish first or recurrent episode, gender, and severity of MDD. All these factors might affect blood NOx levels [18,22,25,29,30].

Taken together, these studies and our research had inconsistent results of blood NOx levels in BD-ME and MDD-DE patients compared with healthy controls. Gene polymorphism may structurally interpret them. Nitric oxide (NO) is synthesized from L-arginine and oxygen (O2) with the help of nitric oxide synthases (NOSs) [7]. The neuronal isoform of NOS (encoded as NOS1) is the main source of NO in humans, and a certain single nucleotide polymorphisms (SNP) in the NOS1 might pathologically disturb NO production by its activity [31]. NOS1 has a complex haplotype structure and diverse characteristics, which might have led to the results of different NOx levels in BD-ME and MDD-DE patients [11,12,18,27,29].

▪ The changes of blood NOx levels in BD and MDD patients

Besides, two studies from Turkey investigated the relationship between NOx levels and Bech-Rafaelson Mania Scale scores [32] in pretreatment BD-ME patients, and reported no significant correlations [9,16]. Our data also supported these results, finding no significant correlation between serum NOx levels and YMRS scores in pre-treatment BD-ME patients. Furthermore, we found that the changes of serum NOx levels were not correlated to the improvement of YMRS scores in BD-ME patients after treatment. Based on the above results, increased levels of serum NOx might not relate with initial status or symptoms improvement in BD-ME patients, which could be explained by mood stabilizer using. Previous studies indicated that lithium and valproic acid would induce NOx synthase and elevated NOx levels after these medications use, and supported the results [33,34]. Almost all patients in our study took mood stabilizer during hospitalization, and then they were found increased the serum NOx levels after treatment, which were not correlated to the change of YMRS scores.

Few studies have compared the changes of NOx levels pre-treatment and post-treatment in MDD-DE patients [17,18]. Herken et al. (n=32) detected serum NOx levels at pre-treatment and post-treatment, in a study period of 8 weeks, and found significantly decreased NOx levels [18]. Lu et al. revealed that NOx levels remained elevated, without a significant difference (n=7, p ≥ 0.128), even after 2 months of fluoxetine treatment [17]. Baranyi et al. indicated increased NO production might be an indicator of remission in major depression patients [35]. Our data revealed significantly increased serum NOx levels in MDD-DE patients after initial treatment. Two differences in study methodologies might account for above results. One, different antidepressants could produce the same anti-depressant effects but they might decrease or elevate NOx levels [36]. In our study, we used 8 kinds of antidepressant in [18] MDDDE patients with obvious heterogeneity, so it might indicate the increasing trend of NOx levels after “general” antidepressant treatment. Second, the length of treatment time was different. We collected NOx data at around 4 weeks compared to the 8 weeks of previous studies. The difference in time of NOx collection might have affected the results.

One NOx protective hypothesis explained increased NOx level after treatment. NOx caused a reaction with superoxide (O2-) to form highly oxidant and neurotoxic peroxynitrite (ONOO-) [37]. ONOO- can attack neural cells and has a calamitous role in neuro-degeneration and mood switching [7,38]. In contrast, NOx had a benefit in functional recovery and synaptic plasticity from cerebral ischemia in some studies [39-41]. The patients showed increasing NO level after treatment, which regulated endothelial function via arginase activity, L-arginine/ asymmetric dimethylarginine (ADMA) ratio, and global arginine bioavailability [35]. Taken together, NOx was not toxic, and played a neuroprotective role via endothelial regulation system.

Several limitations should be highlighted. First, measuring NOx levels in blood samples from different locations, such as brain tissue and peripheral blood (RBC, plasma, or serum), may result in some discrepancies. We collected NOx data of all subjects from peripheral venous serum. Second, we prescribed heterogeneous antipsychotic agents, mood stabilizers, and antidepressants for each patient. Not prescribing the same medication may have influenced the results. Serum NOx may be increased after antipsychotic treatment [42], increased while mood stabilizers using [33,34], and increased or unaffected after using antidepressant [43,44]. Third, age differences may influence oxidative stress biomarkers and result in discrepancies [45]. There was a significant difference in mean age of the BD-ME and MDD-DE patients and healthy controls in our study, but multiple regressions showed that it was not a significant factor affecting NOx levels. Fourth, sample sizes were too small to group individuals by gender, BMI, and medications, which may yield differences in NOx levels and hinder adequate statistical analysis [46]. Future studies should include follow-up NOx data of patient different states, and use large sample sizes to distinguish different kinds of medications, gender, age, and BMI, to determine the association between mood disorder and serum NOx levels.

There is no conflict of interest regarding publication of this paper. We obtained no financial support from any drug company. 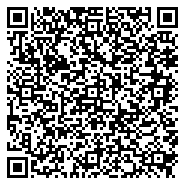