Asymmetric dimethylarginine (ADMA), an endogenous inhibitor of the endothelial nitric oxide synthase, is specifically related with cranial small vessel disease. We aim to investigate the baseline level of serum ADMA in correlation to neurodevelopmental outcomes in a cohort of very low birth weight premature infants.

A total of 50 very low birth weight (VLBW, <1500 g) preterm (gestational age â¦ 30 weeks) infants were included and assigned to a High or Low ADMA baseline level group according to the plasma ADMA levels obtained within 6-12 hours after birth. All patients were followed prospectively for the neurodevelopmental outcomes. Causes of morbidities were analysed and compared.

No differences in gestational age, birth body weight, 1’ and 5’ Apgar scores, gender prevalence, and serum creatinine level were noted between study groups. Premature infants with high ADMA baseline level had a higher incidence of periventricular echogenecity persisting longer than 2 weeks (p= 0.013), and a higher ratio of delayed psychomotor development at 6 and 12 months corrected age (p=0.041 and 0.012). ADMA baseline level is inversely correlated to the Psychomotor Developmental Index at 6 and 12 months corrected age within the high ADMA baseline level group (p=0.02, p=0.027 respectively). The occurrence of retinopathy of prematurity, chronic lung disease, and patent ductus arteriosus requiring medication intervention were of no significant differences between study groups.

Increasing cardiac output and decreasing peripheral resistance, the alterations in blood pressure and vascular reactivity to vasoconstrictors are some of the important changes that occur in the maternal vascular system during pregnancy [1]. And it is these changes that ensure adequate delivery of oxygen to the fetus. There are several factors, either of maternal or neonatal origin, which affect the nitric oxide (NO) metabolism and play a role in the pathogenesis of some serious disorders, such as hypoxic ischemic encephalopathy, persistent pulmonary hypertension, necrotizing enterocolitis and chronic lung disease [2-6].

Asymmetric dimethylarginine (ADMA), an endogenous inhibitor of endothelial NO synthase, competes with L-arginine as a substrate for NO synthase. Higher plasma levels of ADMA have been implicated in the pathogenesis of the endothelial dysfunction, atherosclerosis [7-9], as well as increasing the risk of developing stroke [10], transient ischemic attack [11], and it is recently associated with image findings of smallvessel disease, specifically with the severity of white-matter abnormalities [12].

Elevated ADMA levels during pregnancy have been reported as an important pathophysiological factor in the development of preeclampsia [13,14]. Although, the effects of maternal factors or fetal problems during delivery on the ADMA levels are still not fully understood. Vida et al. [15] and Tsukahara et al. [16] investigated the plasma ADMA levels during the perinatal period and showed that ADMA might have an important role both in the control of the fetoplacental circulation and the neonate’s postnatal circulatory adaptations. Thus it is possible that the baseline ADMA level of the neonate might significantly reveal the severity of intraunterine endothelial dysfunction. Our study aimed to correlate baseline ADMA level to long-term neurodevelopment status in a cohort of very low birth weight premature infant.

Very low birth weight preterm infants delivered with Gestational age ≦30 weeks and birth body weight less than 1500 grams were recruited prospectively to participate in the study conducted at Kaohsiung Chang-Gung Memorial Hospital, Kaohsiung, Taiwan from June 2012 to May 2014. The exclusion criteria were as follows: neonates who required intense resuscitation, infants with craniosonographic images of interventricular hemorrhage or periventricular cystic leukomalacia, with congenital anomaly, metabolic disorders, and maternal drug abuse history were excluded from the study.

ADMA, SDMA (Symmetric Dimethyl- Arginine), and Arginine was measured using commercially available ELISA kits (DLD Diagnostika GmbH, Hamburg, Germany). The blood samples taken from the premature infants were immediately placed on ice and centrifuged at 3000 rpm for 10 min at 48 0C. Plasma was immediately put in liquid N2, and stored at 2-8 °C before analysis; the levels of ADMA, SDMA, and Arginine were measured from aliquoted serum samples. The sensitivities of ADMA were 0.05mol/l. The intra-assay coefficient variation of ADMA was < 7.5%, respectively.

Developmental outcome of each candidate was assessed by the Bayley Scales of Infant Development II (BSID II) at 6, and 12 months corrected age respectively. A pediatric psychologist who was unaware of the craniosonographic finding was involved in the developmental assessment. The BSID II provided relevant information to aid in the diagnosis of developmental delay. There are two parameters within BSID II: the Mental Developmental Index (MDI) and the Psychomotor Developmental Index (PDI). Mental index assesses cognition, language, and interpersonal social development. Motor index evaluates the fine and gross motor development. A child was considered to have significantly delayed development if the score was below 70; while a score between 85 and 114 was considered normal. The developmental outcomes of the infants that were studied in the two groups were compared and contrasted.

In this current study, antenatal steroids were defined as at least one dose of either betamethasone or dexamethasone given prenatally. Chorioamnionitis was diagnosed clinically by an obstetrician and recorded in the maternal records with at least one of the following: maternal fever >38.1°C, maternal leukocytosis, uterus tenderness, foul-smelling amniotic fluid and positive amniotic fluid culture. Periventricular echodensity (PVE) was defined as one or more areas of increased echodensities with at least one dimension greater than 1 cm in the periventricular region, seen in both coronal and sagittal planes and persisting for at least one week and after disappearance of these echodensities no cystic lesions and/or ventricular dilation were observed. And it is our institutional protocol to perform craniosonographic image assessment start from the 1st week after birth and then at a weekly intervals ‘til one month of age, then monthly interval thereafter and ended when two consecutive studies revealed a normal craniosonography.

Group means derived from the standard deviation of the mean and group differences were assessed by the use of the analysis of variance (ANOVA). The differences of continuous data between patients of the two groups were compared by two-sample t test or Mann- Whitney U test, when appropriate. Categorical data were compared by means of Chi-squre test or Fisher’s exact test. Variables included in the factor analysis were gestational age, gender, birth weight, Apgar score, and creatinine level were included as potential covariates, and those that differ statistically were included in the univariate analysis in stepwise logistic regression model. A P value of < 0.05 was considered to be significant. Statistical software Minitab 16 was used for analysis.

This study was approved by the institutional review board and the ethics committee of the Chang- Gung Memorial Hospital. Written informed consent was obtained from all participants before the commencement of the study.

The enrolled infants’ characteristics are presented in Table 1. The patients’ characteristics were of no differences between the Low vs. High baseline level ADMA groups. Among these 50 premature infants, there were 21 female and 29 male infants with gestational age that ranged from 24 weeks to 34 weeks and birth body weight that ranged from 565grams to 1500 grams. There were 38 premture infants in Low ADMA baseline level Group and twelve in the High ADMA baseline level Group.

Plasma concentrations of ADMA, SDMA, arginine, and the arginine:ADMA ratio (AAR) are shown in Table 2. The plasma arginine concentration revealed no significant difference between both premature infants with Low or High ADMA baseline level Groups, p=0.1. Plasma SDMA was not different between the two groups. The AAR was significantly lowered (P=0.042) in premature infants with High baseline level ADMA. 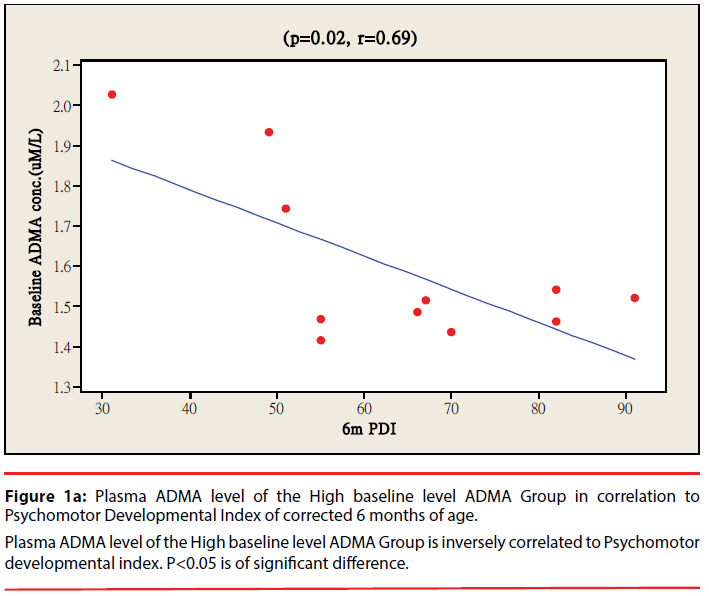 Overall, premature infants with High baseline level ADMA had significantly higher ratio of delayed psychomotor development throughout a year of BSID II evaluation as compared to the infants with Low baseline level ADMA group. There are no significant difference in the occurrence of retinopathy, chronic lung disease, patent ductus arteriosus, and necrotizing enterocolitis between the 2 study groups (Table 4).

The primary finding of the present study was that elevated plasma baseline levels of ADMA is a powerful and independent predictor of adverse psychomotor development. To our knowledge, this is the first study which demonstrated that in VLBW premature neonates, if present with a higher baseline plasma level of ADMA (≥0.895 mol/l), would have a significantly poorer psychomotor development as compared to premature infants with lowered baseline plasma level of ADMA (≦0.895 mol/l) after adjustment for traditional neurodevelopmental influencing factors.

There are many clinical studies correlating elevated circulating levels of ADMA concentration in patients with cardiovascular risk factors and endothelial dysfunction [17-19]. High levels of baseline ADMA have been shown to be independently predictive of adverse outcomes in a variety of patient populations, such as those with peripheral vascular disease [20], acute coronary syndromes [21,22], and those with established coronary artery disease [23]. Our study demonstrated that premature infants with high baseline level of ADMA tended to have a delayed psychomotor development at one year of corrected age possibly due to higher association with PVE >2 wks. The significant higher association between PVE persisting greater than 2 weeks and higher serum ADMA level might be related to the greater contribution of increasing systemic vascular resistance [24] and imparing endothelial function in the brian; as demonstrated by Kielstein et al. [25] that ADMA increased vascular stiffness and decreased total cerebral perfusion.

Furthermore, like NO, ADMA is also a key regulator of vessels dilatation and resistance, and it is also an endogenous inhibitor of NOS which induces endothelial dysfunction by reversibly inhibiting NO production from L-arginine. The L-arginine to AAR is a key determinant of NOS activity and is a useful index for evaluating the effect of ADMA [26,27]. The decrease in AAR might be due to a decrease in L-arginine level or an increase in ADMA level. The significant elevation of ADMA could be a result of enhanced ADMA formation from high protein breakdown or reduced ADMA elimination. As in fetal hypoxia, the blood flow to the periphery (kidney, spleen, skin, and muscle, liver) is decreased, shifting the circulation towards vital organs [28]. Secondarily, dimethylarginine dimethylaminohydrolase (DDAH) metabolize ADMA and is excreted directly into the urine [29]. Decreased blood flow to the kidneys during hypoxia might have contributed to the impaired renal elimination of ADMA and thus resulted in higher plasma ADMA. In our study, the AAR was significantly lowered in high baseline level ADMA group; since the L-arginine level was of no significant difference between both Low and High baseline level ADMA groups, it is prudent to think that decreased AAR noted in preterm infants with high baseline level of ADMA might be a consequence of poor control of the fetoplacental circulation and the neonate’s postnatal circulatory adaptations as previously pointed out by Tsukahara et al. [15] and Vida et al. [16].

This study was supported by a research grant (CMRPG8B0161&CMRPG8B0162) from the Chang-Gung Memorial Hospital to Dr. Chih- Cheng Chen. The authors have no conflicts of interest relevant to this article.