Epi-Aortic Trunk Evaluation in Elderly Patients with and Without Depression: A Cross-Sectional Study

Subjects with atherosclerosis were more likely to be depressed. Moreover the severity of LLD seems increasing progressively in patients with Mild and Moderate-severe atherosclerosis.

Depression is not a normal component of aging [1]. It is one of the most common diseases in elderly patients worldwide [2]. Depressive syndromes that arise from 65 years and over are tagged as Late-life depression (LLD) [3]. Moreover, there is a general consensus on a syndromal approach to LLD to identify symptom clusters such as late-life major depressive disorder (MDD) [2]. Late-life MDD has a pooled prevalence of 7% [4] and accounts for 5.7% of years lived with disability among over 60 year olds [4].

The serious consequences of persistent depressive symptoms in older persons include relapse and recurrence [5], functional disability [6], increasing of health care utilization [7] and cognitive decline owing in part to the impact of long periods of untreated depression on hippocampal volume [8]. Persisting of depression is also associated with an increased mortality [9].

Depression pathophysiology is complex and implicates mechanisms involved in vascular disease, especially in LLD patients [10]. It has been shown that cerebral white matter lesions (WMLs) are more common in individuals with LLD than in healthy controls [11,12]. WMLs are focal or confluent areas in the cerebral white matter that display high signal intensity on T2- and proton density–weighted magnetic resonance imaging (MRI) [10]. The development of WMLs is allowed by carotid atherosclerosis through inducing cerebral hypoperfusion [10]. This last condition may be explained by decreased compliance of the carotid artery wall that leads to a higher pulsatile pressure in the cerebral vasculature and, in response, adaptive vascular remodeling inducing hypotensive conditions and localized brain tissue ischemia [13, 14]. This feasible hemodynamic effect of carotid atherosclerosis could be an important mechanism behind WMLs in depression, not the least because patients with LLD [15, 16] show signs of increased arterial stiffness.

This cross-sectional study was conducted on the basis of the guidelines for Good Clinical Practice, the Strengthening the Reporting of Observational Studies in Epidemiology (STROBE) and was approved by the local ethics committee. Written informed consent for research was obtained from each patient or from.

Patients were eligible for study inclusion if they had reached the age ≥ 55 years, the ability to provide an informed consent or availability of a relatives or a legal guardian in the case of severe demented patients, the diagnosis of LLD according to the criteria of the Diagnostic and Statistical Manual of Mental Disorders, 5th Edition (DSM 5) [25], a complete CGA, a clinical and cognitive-affective assessment.

The diagnostic criteria for major depression in the DSM-5, require the presence of either sadness or anhedonia with a total of five or more symptoms over a 2-week period [25].

Moreover, all patients had performed a neuroimaging examination (CT scan) in order to highlight the presence of WML.

Through a semi-structured interview medical history and milestones from the patient’s life were performed as below shown: 1) life time tobacco use, 2) psychoactive substance use and abuse, 3) history of vascular disease (stroke, myocardial infarction, and significant cardiac arrhythmia), 4) blood pressure, and 5) height and weight.

Hyperlipidemia was defined according to the Guidelines for management of dyslipidemia and prevention of cardiovascular disease [37].

Diabetes mellitus was defined according to the Consensus Statement by the American Association of Clinical Endocrinologists and American College of Endocrinology on the Comprehensive Type 2 Diabetes Management Algorithm [38].

The diagnosis of carotid stenosis in the selected cases was performed through clinical examination, including B-Mode Ultrasound scan and Color Doppler ultrasound scan of the epi-aortic trunks using ATL HDI 5000 (Philips, Amsterdam, Netherlands) [39]. Intima-media thickness was measured by recording ultrasonographic images of both the left and right carotid arteries. The lumen intima interface and the media-adventitia interface of the distal common carotid artery were measured offline. The common carotid intima-media thickness was determined as the average of near and far wall measurements of both left and right sides. The presence of plaques in the carotid artery was assessed by evaluating the ultrasonographic images of the common, internal, and bifurcation sites of the carotid artery for the presence of atherosclerotic lesions [40]. According to European Mannheim consensus, plaques were defined as a focal widening relative to adjacent segments and composed of calcified or non-calcified components: the plaques encroach into the lumen by 0.5 mm or by 50% of the surrounding intima-media thickness or where intima-media thickness is >1.5 mm [41].

During the enrolment period, 4653 elderly patients were screened for the inclusion in the study.

Therefore, the patients were examined according to the presence/absence of LLD, depression severity, and atherosclerosis severity.

Ã¢ÂÂª Patients with and without LLD

Ã¢ÂÂª Patients with LLD according to depression severity

Table 3. Demographic, affective, cognitive and clinical characteristics of older patients with Late-life depression (LLD) according to the depression severity.

Table 4: Vascular risk assessment of older patients with Late-life depression (LLD) according to the depression severity.

Table 5: Demographic, affective, cognitive and clinical characteristics of older patients according to the atherosclerosis severity.

Table 6. Vascular risk assessment of older patients according to the atherosclerosis severity. 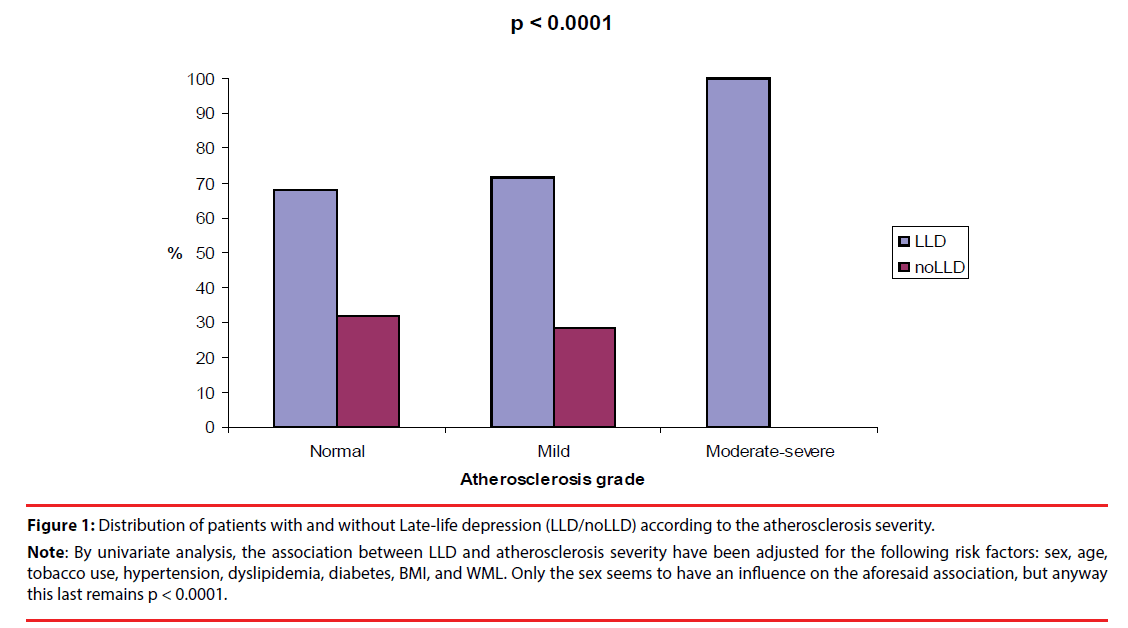 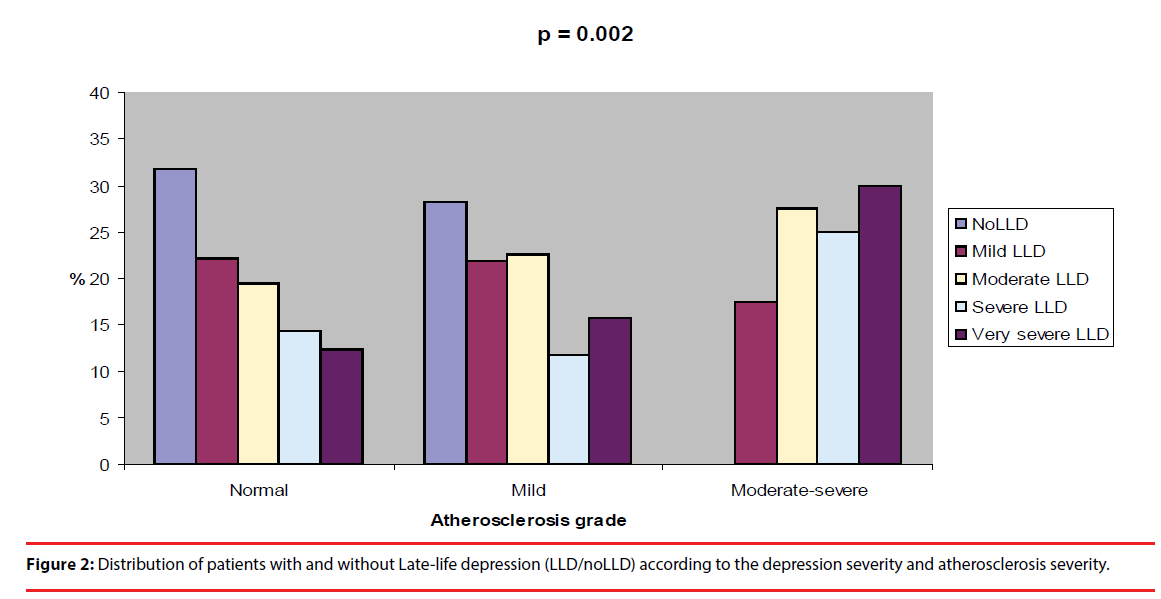 Figure 2: Distribution of patients with and without Late-life depression (LLD/noLLD) according to the depression severity and atherosclerosis severity.

In our study, the role of sex seems to impact the development of LLD: indeed LLD patients were mainly more females. It was widely demonstrated that depression symptoms are twice as common in women than in men [43]. Interestingly, compared with females, we found that males were generally more likely to have the moderate-severe carotid atherosclerosis. This is in line with a of the largest comparable studies analyzing the effect of sex on plaque morphology. In the aforementioned study of 450 carotid specimens, Hellings et al [48] showed that atheromatous plaques were also more frequent in men than in women.

Some limitations of the present study must be acknowledged. In fact, nonetheless the large sample of LLD/noLLD patients with an epiaortic trunk evaluation were investigated, the main limitation was the very loss number of patients with moderate-severe carotid atherosclerosis. Furthermore, the study population comprising only Caucasian patients recruited in a single centre, so it could be possible that our results may not be applicable in other populations. Larger prospective multicenter studies are therefore needed to confirm the present findings.

The authors declare that there are no conflicts of interests regarding the publication of this article.

GD, MGL and MP conceived of the study. GD, MGL, MP and DSa created the search protocol. GD examined the literature. MGL and MP had performed the Duplex ultrasound scans in Vascular disease Evaluation Unit. GD, DSa, MLa, LC and AM had recruited the patients in Ageing Evaluation Unit. GD contributed to manuscript preparation. MPD, DSe, MS, DSG, VI, MLe, AR and AG contributed to review the paper. The authors confirm that the manuscript has been read and approved by all named authors and that there are no other persons who satisfied the criteria for authorship but are not listed. The authors further confirm that the order of authors listed in the manuscript has been approved by all.