Depression and Anxiety as a Valid Issue in Geriatric Patients

The coexistence of depression and anxiety in the overall clinical picture is a lasting problem in the geriatric subpopulation. Anxiety-depressive disorders are the cause of numerous somatizations; they can modify the course of many diseases and complicate making a proper diagnosis. Depression is the most common emotional disorder in the elderly, often underestimated, and according to various authors, the prevalence ranges from 5 to 44%. The percentage of anxiety in geriatric patients varies from 3.2% to 21.6%. The aim of research was to determine the difference of anxiety level in hospitalized depressed patients compared with patients not suffering from depression, analysis of dependence between the anxiety level and depression exacerbations as well as researching what types of psychical and somatic signs are most often related to anxiety. The study included 60 patients of the Geriatric Clinic of Collegium Medicum UMK in Bydgoszcz aged 65 and older who did not suffer from dementia and their somatic state allowed examining them. Geriatric Depression Scale (GDS) and Hamilton Anxiety Scale (HAMA) were used as research tools. Sociodemographic data were collected using a standardized interview. The patients were divided into two groups of 30 persons based on GDS confirming depression symptoms’ presence or their lack. Analysis of the results showed a significantly higher level of anxiety in subjects with depression than in patients without depression. It defined the dominant symptoms in the mental and somatic sphere generated by anxiety, and clarified correlations between variables regarding the current life situation of patients and their level of depression and anxiety. Current international literature reports confirm that the problem of the coexistence of depression and anxiety is still valid and affects many aspects of the health situation of elderly people.

The severity of anxiety and the duration of its anxiety are individually variable. It manifests in different areas of life. On the level of emotional functioning, it can be expressed in the form of a feeling of threat, permanent tension, and lack of decision making. In the mental sphere, there is an inability to focus attention, and there is a deficit of rational assessment of the situation. Restlessness is observable. Anxiety may take the form of various somatic symptoms, i.e. headaches, muscle tension, palpitations, strangulation, choking, tightness in the throat, dry mouth, sweating, urinary urgency, chronic constipation and others.

Since multi-disease is a characteristic feature of geriatric patients, a detailed assessment of the presented symptoms is the basis for accurate diagnosis and proper therapy.

The aim of the study was to determine the difference in the level of anxiety among hospitalized patients with depression comparedwith subjects without depressive disorders, to verify the relationship between the level of anxiety and the severity of depression, to determine what type of psychological and somatic symptoms are most often associated with anxiety, to check the correlation of anxiety and depression in people over 65 with variables related to the current life situation (age, sex, financial situation, health status, etc.) and to determine whether depression and anxiety are a problem nowadays and whether they still arouse interest in the world of science.

The research was carried out among 60 patients of the Geriatric Clinic of Collegium Medicum UMK in Bydgoszcz, aged 65 and older, without dementia, whose condition allowed the study to be conducted.The patients were divided into two groups of 30 persons. The first group consisted of patients diagnosed with depression according to the ICD-10 criteria and the result in the Geriatric Depression Scale (GDS) indicating the presence of this disease. The second group qualified people whose GDS result indicated lack of depression.

Full version of GDS containing 30 questions was used in the study. The intensity of anxiety was assessed using the Hamilton Anxiety Scale (HAMA). This scale describes anxiety as a psychopathological syndrome, which consists of psychological, somatic and behavioural symptoms included in afive-degree, fourteen positional scales. Data regarding the current life situation of the patient were collected using a standardized interview. The following sociodemographic variables were controlled: age, sex, marital status, number of children, education, self-assessment of health status, place of residence, income.

The average age in the entire study group was 75.7 years. Women (47 people) accounted for 78.3% of the surveyed group, and men (13 people) - 21.7%. The first group included 22 women and 8 men aged 65-93 who did not suffer from depression according to GDS. The second group consisted of 25 women and 5 men aged 65-86 with the result indicating the presence of depression. Groups were homogeneous in terms of age, marital status, and education and housing conditions. Respondents formed a representative sample of the elderly population regarding marital status, education and income level.The anxiety levelin the HAMA scale in the entire study group was 18.1on average; 9.5 - in the group of people without depression, and 26.6 - with depression. Descriptive statistics of variables: anxiety level, level of depression is listed in Tables 1 and 2.

Note: The level of cognitive functions in patients in both groups was similar. The mean MMSE score in people without depression was 28.8, and in those with depressive disorders - 28.0.

The subjects from both groups were mostly independent in the scope of performing complex daily activities measured using the IADLInstrumental Activity of Daily Living Lawton scale (Table 3).

A statistically significant difference was demonstrated between the levels of anxiety in both groups. The results of the non-parametric U Mann - Whitney test showed that in terms of anxiety level these groups differ significantly statistically. The Z value was Z=(-6.28), with p<0.0000001. The group of subjects with depression presented a higher level of anxiety than the control group. 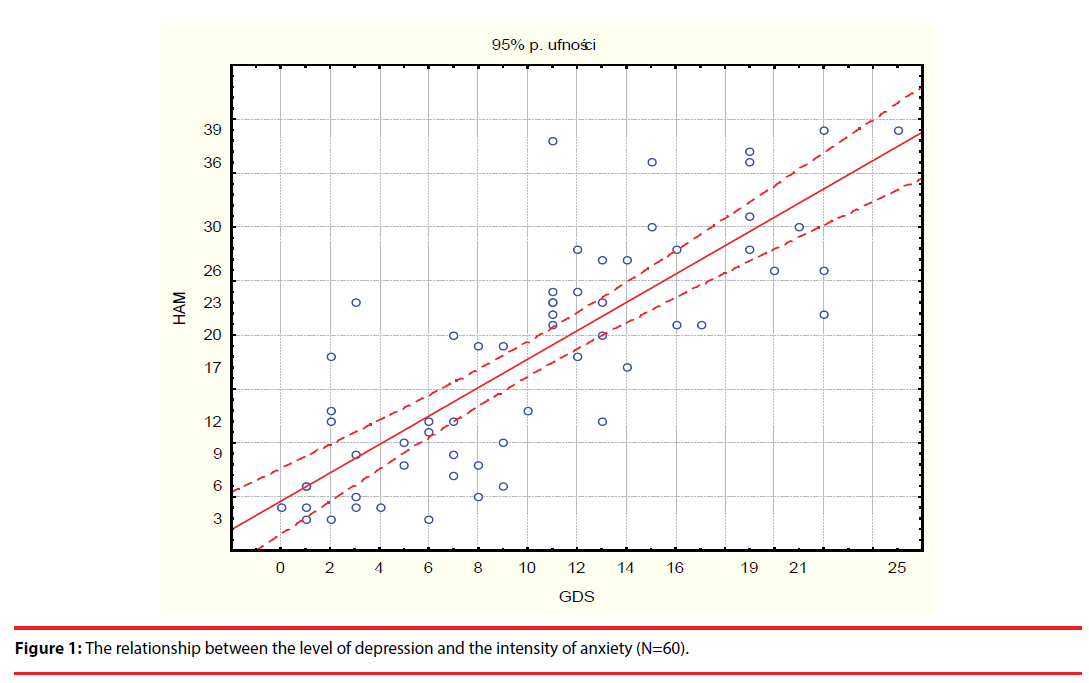 Figure 1: The relationship between the level of depression and the intensity of anxiety (N=60).

Anxiety is a common symptom that accompanies depression at all ages. Over half of patients with depression present anxiety symptoms [1-7]. Reports from the United States of America confirm that the prevalence of depression with anxiety is the highest among people over 65 and amounts to 51.8% (severe depressive disorder [MDD] co-occurred with anxiety disorders or dysthymia).

In the conducted study of the geriatric patient population, confirmation of the possibility of occurrence of many disease symptoms, often not justified in the physical state of the body, was obtained. The most common anxiety symptoms that accompanied people with depression were: symptoms of the vegetative system, insomnia, tension, gastrointestinal symptoms, and cardiovascular symptoms. This confirms that the mental and somatic anxiety symptoms coexist with depression and may dominate the clinical picture. Therefore, anxiety may produce physical symptoms that may be misdiagnosed as a somatic disease. In the latest research on this issue, confirmation of the occurrence of numerous somatizations reported by geriatric patients can be found [11,12]. Both acute and chronic forms of anxiety disorganize the complex human activity, sometimes they completely exclude him from social life [13,14].

Falls are very unfavourable events and belong to great geriatric problems. They often lead to isolation and deterioration of the quality of life of older people. Current research conducted by Painter et al. confirms the existence of a strong dependency between falls, anxiety and depression [15].

A clear classification of anxiety and depression ceases to be obvious when we take into account the latest research on the prevalence of these disorders in the population. According to epidemiological studies, anxiety and depression co-exist more frequently than previously recognized [16]. Additionally, clinical practice more often indicates that both disorders overlap, although in specific cases they are clearly differentiated diagnostic categories. In order to describe the type of disorders in which depression and anxiety occur in older people, some authors use the term depression and anxiety syndrome, which has its counterpart in the ICD-X classification (mixed anxiety-depressive disorders). This mixed category is used when both symptoms of anxiety and depression coexist, but none of them is reaches such intensification to justify independent diagnosis. The syndrome is characterized by a variable tendency to domination of both symptoms [17,18]. It is difficult to differentiate these symptoms in the elderly. The clinical picture of disorders is very often non-specific. Depression and anxiety can occur under the so-called somatic mask (complaints reported by patients are not very specific) or are preceded by various types of somatic diseases [11-19]. Unrecognized may lead to many serious, harmful health consequences, often of iatrogenic type. When treated inappropriately they cause various ailments (insomnia, pain syndromes), somatic and psychological damage, i.e. addiction to analgesics, sleeping pills, and probably also contribute to shaping the suicide rate [20]. In addition, erroneous treatment exposes patients to unnecessary, mostly expensive, additional tests. To increase the detection rate of depression and anxiety, an interdisciplinary approach to the problem of diagnosing and treating older patients, including a deeper knowledge of the clinical features of depression and anxiety, and especially cooperation with professionals experienced in geriatric psychiatry, is necessary. Correct diagnosis of this disease specifies epicrisis and facilitates the most beneficial treatment procedure [21]. In order to improve the recognition of depression and anxiety, it is necessary to conduct screening tests among elderly people reporting to medical facilities [7-23]. As we see in the literature, depression and anxiety is a valid issue in geriatric patients all over the world [24-29].

1. There is a statistically significant difference in the level of anxiety between depressed persons and the group of subjects without this disease. Group of depressed patients had higher anxiety level when compared with the group of patients without depressive disorders.

2. Among patients included in this study, the following anxiety symptoms were most common: vegetative symptoms, insomnia, and tension, gastrointestinal and cardiovascular symptoms.

3. There is rectilinear relationship between depression and anxiety level in elderly patients. The higher depression level, the higher anxiety intensification.

4. Depression and anxiety have a negative impact on everyday life causing deterioration of patients’ health as a result of somatization, falls, polypragmasy, incorrect diagnosis, and iatrogeny.

5. Depression and anxiety remain important and current problems in the elderly. Their prevalence is growing, due to, among others, growing subpopulation of older people. These arguments cannot be rejected as seen in the world’s literature on the subject.