Objective: To investigate the occurrence of mild cognitive impairment (MCI) in early and advanced Parkinson’s disease (PD) and identify the risk factors for PD-MCI.

Results: There was no significant difference in MMSE scores between the early and advanced groups. According to PD-MCI Level 1 criteria, 27 individuals (30.0%) in the early group and 16 individuals (33.3%) in the advanced group were classified as having PD-MCI. The proportion of PD-MCI was not significantly different between the two groups (chi-square = 0.162, p =0.687). No demographic or clinical factors were significantly associated with the development of PD-MCI.

Conclusions: Cognitive impairment is stable in PD patients with short disease duration when the MMSE is used as a global cognitive test. The occurrence of PD-MCI is high, even in newly diagnosed PD patients.

Parkinson’s disease (PD) is a progressive neurodegenerative disorder with a prevalence estimated at approximately 1.7% among people above the age of 65 in China [1]. PD is characterized by cardinal motor symptoms, such as bradykinesia, rigidity, postural instability, resting tremor, and non-motor symptoms, including psychiatric problems, autonomic disturbance, pain, fatigue and impaired cognition [2,3].

Among non-motor symptoms, cognitive dysfunction is a common finding, and may be present to different degrees, ranging from mild cognitive impairment (PD-MCI) to PDassociated dementia (PDD). Evidence suggests that over 40% of early PD patients have PD-MCI, and at least 75% of patients will eventually develop dementia in the advanced stages [4]. Cognitive decline progresses with disease course, and cognitive impairment is no longer considered just a late-stage problem [5-7]. Cognitive impairment is associated with decreased quality of life and increased functional impairment, caregiver burden and likelihood of placement in nursing homes [8-10]. Therefore, methods for early detection and intervention of cognitive dysfunction in PD patients would be valuable. In 2012, the Movement Disorders Society (MDS) Task Force proposed new criteria for PD-MCI. These criteria utilize a two-level operational schema depending on the comprehensiveness of neuropsychological testing: an abbreviated assessment (Level 1 criteria) and a comprehensive assessment (Level 2 criteria) [11]. In Level 1, PD-MCI can be diagnosed using an abbreviated global cognitive assessment, and several tests are suggested. However, there is no well-established recommendation for neuropsychological scales for screening global cognitive abilities. The Mini-Mental State Examination (MMSE) has traditionally been widely used for screening cognitive impairment in many neurological disorders [12]. The MMSE is easy to administer, correlates well with comprehensive neuropsychological assessments, and its diagnostic value has been verified [13]. However, the utility of the MMSE has been questioned in patients with PD in recent years, showing lower sensitivity in identifying PD-MCI compared with other global cognitive scales, such as the Montreal Cognitive Assessment (MoCA) scale [14,15]. A study of MoCA performance in patients with PD with normal MMSE scores reported that 52% of subjects had cognitive impairment when using MoCA as a screening instrument [16]. In another study, neither the MMSE nor MoCA provided an adequate level of combined sensitivity and specificity for PDMCI [17]. In the present study, we hypothesized that PD-MCI may change over time and have a higher frequency in the advanced stages of PD. Thus, we aimed to determine the frequency of MCI and compare global cognitive function using MMSE as an assessment tool in early and advanced PD patients. Additionally, we sought to identify the risk factors for PD-MCI.

The current study included consecutive patients with PD who presented at the outpatient movement disorder clinic of Tianjin Union Medical Center (TUMC) and Tianjin Huan Hu Hospital between April 2015 and December 2017. A total of 138 patients who met PD diagnostic criteria according to the United Kingdom Parkinson’s Disease Society Brain Bank Clinical Diagnostic Criteria were included in this study [18]. Primary criteria for PD-MCI were based on MDS Task Force criteria for PDMCI Level 1 criteria (abbreviated assessment) and required (1) an assessment of cognitive decline, reported by the patient or an informant, or observed by the clinician; (2) functional independence; and (3) impaired performance on MMSE (MMSE score ≤ 25) [11]. The exclusion criteria included any of the following: (1) presence of other neurological disease; (2) other parkinsonian disorders such as druginduced parkinsonism, vascular parkinsonism and/or atypical forms of parkinsonism; (3) presence of a psychiatric disorder; and (4) inability to provide written informed consent. No acetylcholinesterase inhibitors or N-methyl- D-aspartate receptor antagonist were used by the patients. The study was approved by the Ethics Committee of TUMC. All subjects provided written informed consent before participating in the study.

The MMSE was used to assess general cognitive abilities (maximum score = 30). Motor symptoms were evaluated using the Unified Parkinson’s Disease Rating Scale (UPDRS) part Ⅲ and the Hoehn and Yahr Stage [19]. UPDRS was performed during the patients’ “on ” state. Daytime sleepiness was assessed using the Epworth Sleepiness Scale (ESS) [20] and depression was measured using the Beck Depression Inventory (BDI) [21]. Quality of life of was assessed with the 39-item Parkinson’s Disease Questionnaire (PDQ-39) [22]. The demographic and clinical variables included in our study were age, age of onset, sex and disease duration.

Baseline characteristics are reported as means ± standard deviations or medians (and interquartile ranges) for continuous variables and frequencies for categorical variables. Patients were classified into early (stages 1–2.5) and advanced (stages 3–5) PD groups according to the Hoehn and Yahr staging system. Levene and Kolmogorov–Smirnov tests were used to determine homogeneity and normal distribution of variance. We compared early and advanced groups using chi-square tests for categorical variables and t-tests for normally distributed or homogenous variables. Pearson’s correlation analysis was conducted to examine the relationships between disease duration and UPDRS Ⅲ, PDQ-39, MMSE, ESS and BDI scores. The demographic and clinical risk factors of PD-MCI were investigated using binary logistic regression. The following variables were considered for entry in the model: age of onset, sex, disease duration, UPDRS Ⅲ, ESS and BDI. The reported p-values were two-tailed, and p-values < 0.05 were considered statistically significant. All analyses were performed using IBM SPSS software (version 21; IBM Corporation, Armonk, NY).

The demographics and clinical characteristics of the 138 recruited patients are presented in Table 1. Patients in the early PD group had significantly lower UPDRS Ⅲ, PDQ-39, ESS and BDI scores compared with the advanced group. There were no significant differences in MMSE scores between the early and advanced groups (Table 2, Figure 1). According to PD-MCI Level 1 criteria, 27 individuals (30.0%) in the early group and 16 individuals (33.3%) in the advanced group were classified as having PD-MCI. The proportion of PD-MCI was not significantly different between the two groups (chi-square =0.162, p=0.687) (Table 2). Pearson’s correlation analyses revealed that UPDRS Ⅲ, PDQ-39, ESS and BDI scores were significantly correlated with disease duration among PD patients (Table 3). Motor function, quality of life, daytime sleepiness and mood deteriorated with disease progression. There were no significant correlations between MMSE scores and disease duration (Table 3).

Table 1: The demographics and clinical characteristics of the patients. 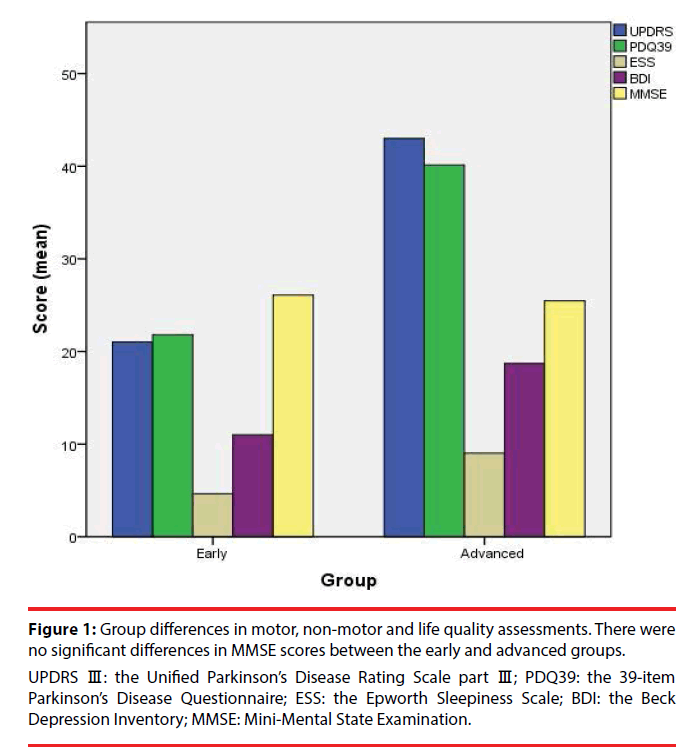 In the binary logistic regression model, no demographic or clinical factors were significantly associated with the development of PD-MCI (Level 1 criteria) (Table 4).

In the current study, we compared motor and non-motor symptoms between early and advanced PD groups, and found that patients presented with more severe symptoms in motor function, quality of life, daytime sleepiness and mood, but not cognition, when using the MMSE for measurement in the advanced stages. The proportion of patients with PD-MCI meeting Level 1 criteria was 30.0% and 33.3% in the early and advanced groups, respectively. This rate is consistent with previous studies reporting that MCI occurred in 20–30% of patients with PD, even among newly diagnosed patients [7,23]. One study reported that the cumulative incidence of developing cognitive impairment was 8.5% within 1-year follow-up, and up to 47.4% within 6-year follow-up [24]. In another study, the incidence of cognitive impairment in PD patients increased to 60% by 12 years of retrospective follow-up [25]. However, cognitive decline was found to be stable in newly diagnosed patients with PD. In a longitudinal study applying Level 1 criteria, 70% of newly diagnosed participants were cognitively stable, 19% cognitively declined and 11% improved over 36 months [26]. Similarly, a recent study of 155 patients with PD over 18 months showed significant reductions in MoCA scores, but not MMSE scores [27]. In the current study, we failed to find increasing incidence of PD-MCI in the advanced group. There are at least three potential explanations for this discrepancy. First, the patients in our study had shorter disease duration (3.01 ± 2.56 years). Second, Level 1 criteria were applied for PD-MCI diagnosis with MMSE as a global cognitive scale and a more comprehensive assessment was not performed. Third, the MMSE may have poor sensitivity for detecting cognitive decline in PD.

It remains controversial regarding the ideal screening tests to detect cognitive deficits among PD patients. In a multi-center, cross-sectional, observational study, Burdick et al. performed neuropsychological testing in a sample of 788 PD patients with MMSE ≥ 26 and found that a remarkably wide range of cognitive impairments was present in PD patients with normal MMSE scores. Among them, 67% of the subjects had impairment on one or more of the other fifteen neuropsychological tests and 45% had impairment on two or more tests [28]. Another study revealed that the overall discriminant validity for detection of any cognitive disorder was similar for the MMSE and the MoCA, but the MMSE was inferior to the MoCA as a screening instrument for PD-MCI [29]. A multi-center study compared the MMSE, MoCA and the Scales for Outcomes in Parkinson’s Disease-Cognition (SCOPA-Cog) for PD-MCI screening, and none of the instruments provided adequate combined sensitivity and specificity [17]. The emphasis on language and orientation, which are relatively preserved in PDD, may account for the poor sensitivity of the MMSE when applied to PDMCI [30]. Therefore, it is possible that the MMSE under-diagnoses cognitive deficits in patients with PD. The actual occurrence of MCI was higher in our study, even in newly diagnosed PD patients.

In the current study, none of the demographic and clinical factors (sex, age of onset, disease duration, motor dysfunction, daytime sleepiness and depression) increased the risk of MCI in patients with PD. This outcome is inconsistent with previous studies reporting that lower education, increased age, male sex, motor disability, dysfunctional sense of smell, depression and anxiety are associated with cognitive impairment [31-34]. This inconsistency could be explained by the use of the MMSE as a cognitive assessment scale, and the relatively short disease duration of our subjects.

Our study involved several limitations that should be considered. First, the sample size was relatively small, possibly resulting in statistical biases. Second, other potentially influential factors, such as education and medication, were not included in the study because these data were not included in the database. Third, this was not a longitudinal study with followup. Thus, functional cognitive changes over time were not examined. Finally, there was no systematic neuropsychological assessment using a comprehensive cognitive testing battery in the present study. The MMSE has been questioned as a cognitive impairment screening tool in patients with PD, and the current study didn’t compare the sensitivity and specificity of the MMSE with other neuropsychological tests in detecting cognitive impairment in PD.

Cognitive impairment was stable in PD patients with short disease duration when using the MMSE as a global cognitive test. The occurrence of PD-MCI is high, even in newly diagnosed PD patients. Given the high prevalence of MCI in PD, a brief and sensitive screening instrument would be valuable. MMSE may not be an optimal screening tool for PD, and further studies are required to validate more sensitive screening instruments with larger samples.

This work was supported by funding from the Tianjin Municipal Health Bureau (grant number 14KG105). 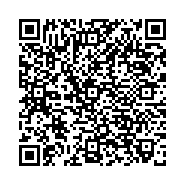