In this study it was to investigate the trend of gene expression in the striatum after the dominant hemisphere ischemia in the rats.

Behavioral tests were used to select 24 right-handed Wistar rats, and the dominant hemisphere ischemic model was archived by the left middle cerebral artery occlusion/ reperfusion (MCAO). 8000 dots gene chip was used to analyze the changes of gene expression profiles in the striatum. In situ hybridization was used to confirm the gene expression and immunohistochemistry stain to find the downstream protein expression of target gene.

35 male Wistar rats, body weighing 260~280 g, adapted to the experimental environment for 7 d, and fasted 2 d before the experiment. On the day of experiment, the rat was put in an individual cage with the front of the cage having a small open window of 1 cm × 1 cm apart, that size can only permit rat’s paw in cautiously, not to put the whole mouth out of the cage to fetch the food.

24 right paw preferred rats were randomly selected into two groups according with the random numbers table, 12 into the left middle cerebral artery ischemia/reperfusion (MCAO) group as the dominant hemisphere ischemia group for the “right-handed” rats, 12 into the right MCAO group as the non-dominant hemisphere ischemia group for the “right-handed” rats. In each group, 9 rats in the ischemia group and 3 in the Sham. The protocol has been approved by Ningxia People’s Hospital of Ningxia Hui Autonomous Region and Northwest University for Nationalities Ethics Committee.

The middle cerebral artery ischemia/reperfusion (MCAO) model in rat by Longa and colleagues [8] was carefully followed and modified in our previously rat model of the dominant hemisphere ischemia study [5,6].

Sham operation was exactly the same procedures, but not blocked the middle cerebral artery by inserting the surgical thread less than 15 mm.

Modified Neurological defections assessment [8,9] which focus on: a) status of consciousness, b) the paws movement ability and c) the ability to feel, was performed 4 times: before ischemia, 24, 48, 72 h reperfusion, respectively.

Suspension of rat tail, rats upper body posture maintain time: when the contra-lateral front or back claws into the body side, according to the time needed for each claw to straighten: 0 (< 1 s), 1 (< 5 s), 2 (> 5 s).

In horizontal posture reflex test, the rat body was put to one side: 0 point (fully resistance to push in the opposite direction), 1 point (little resistance initially then quickly recovery), 2 points (obviously decreased resistance), 3 points down to the contralateral.

In the rat circling tests, the movement of the scoring: 0 point (linear motion), 1 point (to the right movement), 2 (circling movement), 3 points (cannot move at all).

Bilateral striatum were removed from the rat brain in the ischemia group and in the sham operation control, and put into liquid nitrogen tank immediately, 2 h later transferred into -80℃ low temperature refrigerator.

cryopreservation striatum was hammered and grinded into fine powder in the liquid nitrogen to keep low temperature. Air dried RNA for 5~10 min. No RNase water suspension RNA incubated for 10 min at 55~ 60℃, ultraviolet spectrophotometer measured RNA content, adjusted the concentration to 1 μg/μL, -70℃ preserved for later use.

Selected the absolute value of screening of Cy3 >800 and Cy5 >800 respectively, the ratio of Cy3/Cy5 (R/G) > 2.0, or <0.5. No differentially expressed genes within R/G values ranged 0.5~2.0. Outside of the R/G range existed significant differential expression of genes.

In situ hybridization to confirm IGF-1 gene expression: Removed the paraffin by dipping sections in xylene and ethanol. Rehydrated and post-fixed for 30 min in the same fixative. Treated with Proteinse K for 15 min at 37℃. Digitalis-labeled probe for rat IGF-1 mRNA was:

Negative control sections received the same treatment as mentioned above except for exposure to the digitalis-labeled probe.

After 9 h reperfusion the rats were anesthetized with 8% Chloral hydrate and perfused transcardially with normal saline followed by 4% paraformaldehyde. After decapitation, the brain was immediately removed, post-fixed for 2 d in 4% buffered paraformaldehyde+20% sucrose at 4℃, in 30% sucrose perfusion fixative for 2 d at 4℃. After gradient desiccation and paraffin coating the brain was serially sectioned in a coronal plane into 30 micron sections with microtomer (Shouda, Okayama, Japan).

Also, run a negative control (no primary antibody) to check for non-specific staining. Examine the sections under the fluorescent microscope. 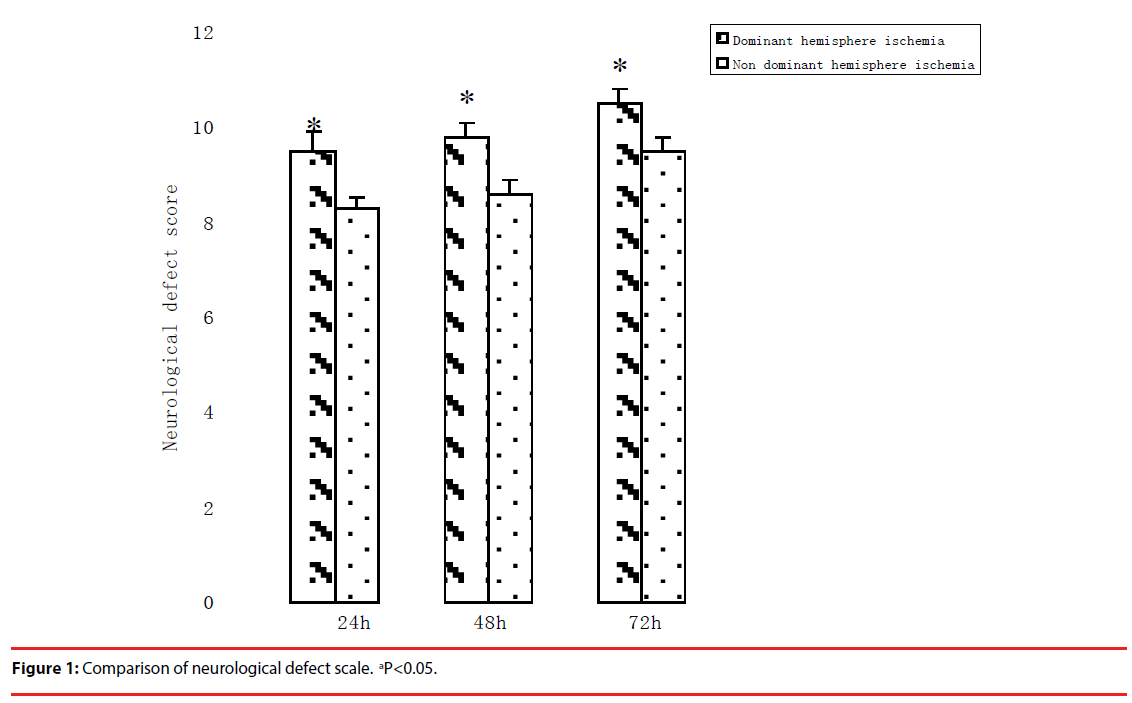 ▪ Changes of gene expression in the striatum after ischemia in rats

Total RNA Extracted from the striatum had no gDNA pollution by PCR examination after DNase I digestion, A260/A280 values between 1.9~2.0, electrophoresis examination without degradation with 28s, 18s, 5s clearly.

The cDNA of the striatum mRNA hydrated within 8,000 gene chip microarrayed by software analysis, yield the absolute value of gene expression at each dot of the gene chip.

Growth factor family genes individual highly expressed, but most low expressed in the ischemic striatum as shown in Table 1.

The genomic response to cerebral ischemia has different pattern. Among the nearly 8,000 genes arrayed nearly 8% of the total numbers of genes examined were changed after cerebral ischemia. These altered expressed genes may be classified into 3 groups: a) known genes previously documented in the pathogenesis of ischemia, b) known genes barely previously involved in the ischemia, and c) cDNAs representing yet uncharacterized genes.

Many pathways including membranes protein, protein kinases, and transcription factors were changed after ischemia. Major ischemic altered genes were down-regulated.

Most growth factor family genes lower expressed in the ischemic striatum, and the IGF-1 mRNA could be the example from this study.

The DNA chip study should be at relative earlier stage of cerebral ischemia considering the detect sensitivity and the efficacy, the ischemic brain tissue might not be used at 24 h reperfusion according our previous study [5]. Therefore the present study for in situ hybridization was designed 9h reperfusion on rat MCAO model. But the IGF-1 protein expressions decreased in the ischemia group after 9h reperfusion.

Human hands preference means asymmetry in the brain. Nearly 90% individuals are right handed [1]. Most of the right-handed has the dominant hemisphere at left hemisphere of the brain, where the language centre and the other complicated function canters located. Dominant hemispheres of the human brain have more function in regulating complex behavior, senior psychological activities than that of the non-dominant hemisphere. Modern neuropsychological researches [2-4] have shown that the left hemisphere of the human brain majors in controlling functions such as language, logical thinking, analytical ability, figures skill and calculation; while the right hemisphere skill for space orientation, shape recognition, music, art, comprehensive ability and short visual memory.

Ischemic injury in the dominant hemisphere of the human brain interfere with important functions such as language, is one of the heavier type stroke clinically without specific treatment now. Possible reason is no dominant hemisphere ischemia animal model available [5,6].

In fact, the preference of rat paw is similar to the human’s handiness. Asymmetry in the brain is a common phenomenon, not only exists in the human brain, but also exists in the animals such as frog, rat. Rat front paw has handiness is decided by existing the dominant hemisphere in the brain [11].

Robinson reported [12] the biochemical and behavior changes after the left or the right hemispheres ischemia in the rat respectively. Anatomical and physiological differences mean asymmetry in the rat brain.

Through the neck surgery made the middle cerebral artery ischemia/reperfusion rat model, would inevitably damage to the vagus nerves in some degree, and the left vagus nerve distributed directly in the heart, therefore has influence on the heart regulation directly, and often can cause blood pressure fluctuations. We often see rat struggle, phlegm and irregular breathing when separation the carotid sheath with the vagus nerve. Another important factor of success for this rat model is smaller outside brain factors as little as possible. Attention should be paid to the asymmetry of the rat brain and reducing the system influence outside of the brain, such as breath and blood pressure, according to the purpose of the study to determine the occlusion side, and do not choose right MCAO or left MCAO at liberty.

Gene chip (cDNA microarray) has tens of thousands dots on the glass, silicon or nylon membrane, represents different genes of oligonucleotide probes, labeled with 32P, 33P, 35S, or fluorescent for DNA hybridization, con-focal laser scanning, computer analysis of fluorescence optical density, obtain the hybridization signal brightness and distribution, and then determine the gene expression profiles of the sample. Because it is in the same condition to detect genes, gene chip has a characteristic of high sensitivity, quantitative and qualitative.

The authors declare there are no financial or nonfinancial competing interests.