Epilepsy is a group of neurological disorders featured by epileptic seizures [1,2]. The characteristic of epilepsy is recurrent, unprovoked and transient dysfunction of central nervous system induced by neurons abnormal discharge (Guidelines to Chinese Epilepsy Diagnosis). The syndromes of epilepsy not only include commonly clinical epileptic seizures, but also contain different degrees of cognitive impairment characterized by impairments of memory, language, attention and executive function. Moreover, cognitive impairments could severely disrupt life of patients with epilepsy, and the severity of epilepsy is associated with the type of seizures, the age of onset and antiepileptic treatment [3].

Working memory, as the core of advanced cognitive functions, is defined as a system to temporarily store information during individuals executing cognitive tasks [4]. The formation of working memory requires complicated cohesive coordination of several brain areas [5]. As epilepsy tends to induce seizures in a long term, we can speculate that the damage of working memory in these patients might be physiological and functional. In the present bibliometric analysis study, we summarized articles and reports related to working memory of patients with epilepsy which published on Chinese professional journals, in order to systematically outline the research status of working memory studies in Chinese patients with epilepsy, provide scientific supports and pave new avenues for future studies of advanced cognition in epilepsy.

We conducted a retrieval of all documents involved in working memory and epilepsy by using China National Knowledge Infrastructure (CNKI) on 1st November 2019. Firstly, keywords (epilepsy, working memory) were used to search documents. Secondly, the index mode was precisely match. Thirdly, the index range was entire. These three index conditions yielded a list of 21 papers.

The selection of studies includes two steps. The first step was to read title and abstract of the research article. The second step was to read the full text. Both steps were conducted by a dedicated doctor of psychology. The search results were selected with following criteria: (1) empirical research reflecting research results by quantitative value; (2) research subjects including patients with epilepsy; (3) research method including working memory tasks; (4) published on Chinese professional journals. Finally, 13 documents were recruited for the quantitative analysis. 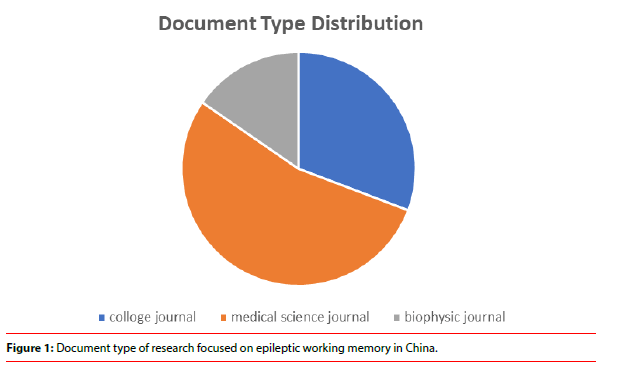 Authors of these 13 documents came from two kinds of institutions which is school of medicine in university (2, 15.4%) and hospitals (11, 84.6%). Methodology used in these working memory studies was based on behavioral research (7, 53.8%) and brain functional research which included functional magnetic resonance imaging (fMRI) study (5, 38.5%) and electroencephalography (EEG) study (1, 7.7%), the details are shown in Table 1.

Subjects involved in these studies contained adult (12, 92.3%) and children (1, 7.7%) with epilepsy. Thereinto, five documents were related to idiopathic epilepsy (38.5%). Seven documents (53.8%) and one (7.7%) document were related to symptomatic epilepsy and cryptogenic epilepsy, respectively. As for research tools, the digit span task and verbal fluency test were the most common tool to measure the capacity of working memory (6, 46.2%). Two studies used the n-back task (15.4%) and other two studies used delayed match task and its variants (15.4%). Self-revised working memory/executive function test was also used in two studies (2, 15.4%). Besides, one research (7.7%) used restingstate MRI scanning to assess visual and spatial working memory network (Table 2).

Epilepsy is a common neurological disorder which characterized as neurons abnormal discharge inducing transient central nervous system dysfunction. Long-term epileptic seizures could result in cognitive impairment, such as working memory impairment. As working memory is the core of advanced cognition, its impairment could lead to dysfunction of cognitive activities such as reading, problem solving and logical thinking [6].

Basic conclusions can be drawn from the above, cognitive impairment is an inevitable result for patients with temporal lobe epilepsy as well as clinical epileptic seizures. However, results showed that patients with epilepsy in remission may have the same opportunity to receive education and work as normal people, and the neuropsychological function of them is also at normal stage [9]. This indicated that the processes of cognitive impairment in epileptic patients may be reversible. Therefore, physicians should pay attention to basically cognitive capability of patients with epilepsy during therapeutic procedures so that side effects of treatment could be reduced.

Epilepsy could damage brain neurons and morphological changes of synapses, which leads to impairment of memory [10,11]. For patients with epilepsy, the severity of working memory impairment is different from each patient due to type of seizure, causes of disease, usage of medication and individual variations [12]. In China, studies involved in the influence factors of working memory impairment of epileptic patients mainly included several aspects as follows:

Secondly, antiepileptics could influence performance of working memory in patients with epilepsy. Specifically, the study of Song and colleagues (2014) [16] used adult patients with partial epilepsy as subjects to investigate the effects of levetiracetam on cognition and electrical activities of brain. Their results demonstrated that the EEG of these patients was the same before and after levetiracetam treatment. Epileptic discharge of patients diminished or decreased at least 50% after 12 weeks of levetiracetam treatment. Moreover, the performance of patients in cognition test was better than that of before treatment. In another study of Song, they used enzyme-linked immune sorbent assay (ELISA) to measure the serum level of glial fibrillary acidic protein (GFAP) combined with trail making test, digit symbol test, digit span test and verbal fluency test to investigate the relation between serum level of GFAP and cognition in patients with epilepsy [17]. The results showed that serum level of GFAP in patients with epilepsy was negatively correlated with patients’ performance in digit symbol test and verbal fluency test, while positively correlated with patients’ performance in trail making test.

Firstly, from the perspective of structure and function, some studies used fMRI to reflect working memory impairment of patients with epilepsy. The study of Wei used fMRI to study working memory of epileptic patients when they were conducting the working memory task [24]. Compared with control group, the activities of dorsolateral prefrontal cortex, bilateral parietal lobe, thalamus, basal ganglia and hippocampus in TLE patients were down-regulated while the activities of some brain areas (precuneus and bilateral cingulate gyrus) were up-regulated. In Wang’s study, the results of fMRI showed that when conducting 2-back working memory task, TLE patients had a worse performance and lower activation level of forehead and parietal brain area than that of control group [25].

Secondly, some studies recorded brain electrical activities to investigate the processes of working memory impairment in patients with epilepsy and damage severity of different components of working memory. Ni and colleagues [28] investigated the role of hippocampus in goal match enhancement and time processes of goal match enhancement by implanting deep brain stimulation in bilateral hippocampus of patients with epilepsy.The findings demonstrated that the left hippocampus played an important role in the goal match enhancement. Moreover, the enhancement effect was detected after 600-650ms of stimulation. Zhu and colleagues [29] they used EEG to study properties of theta oscillations of working memory in patients with frontal lobe epilepsy (FLE). They collected signals of theta oscillations under resting-state state and delayed match task. The results showed that FLE group had a delayed response in working memory task in contrast to control group. In addition, in FLE group, the energy density of Fz electrode and frontal theta oscillations in resting-state were significantly increased compared with control group while decreased in delayed match task.

According to studies above, controlling seizures, avoiding multi-drug therapy, selecting new antiepileptics with little side effects and monitoring therapeutic effect by recording brain electrical activity regularly might be the effective methods to prevent or decrease working memory impairment in epileptic patients. At the same time, The role of diet and food quality has been shown to be important with relevance to working memory performance and the control of epilepsy. Dietary activators are important to the activation of genes that are important to memory performance and the prevention of epilepsy. Controlling seizures by avoiding multidrug therapy, use of new antiepileptics and monitoring therapeutic effects may be linked to diet and food quality to decrease working memory impairment in epileptic patients in China [30-33].