Background and aims: Transgenders face several social disadvantages in the Indian cultural context, and often live on the fringe of the society. Presence of adverse life circumstances predisposes them to have psychological morbidity. In the absence of previous systematic evidence, this pilot study aimed to assess emotional distress and quality of life among transgenders attending a clinic in south India.

Results: The pilot study included 15 transgenders with a median age of 30 years. All the participants had experienced sexual abuse in childhood, and 11/15 (73.3%) had a lifetime suicide attempt. The median HADS anxiety, HADS depression and GHQ scores were 9, 14 and 8 respectively. About 66.7% of the sample had significant anxiety symptoms while 100% had significant depressive symptoms as per HADS cut-off. The quality of life scores were particularly low for the ‘social’ domain.

Conclusion: Transgenders experience considerable emotional distress and have poor social quality of life. Medical professionals need to be sensitive to the health-care needs of transgenders to improve their psychological wellbeing.

Transgender is the state of one’s gender identity or gender expression which does not match with ones assigned sex [1]. Recent estimates suggest that there are at least 490,000 transgenders in India [2]. Though ancient Indian texts document the presence of transgenders since antiquity their present social circumstances are deplorable and are considered at a disadvantaged minority position [3]. Transgenders are quite often made to live on the fringe of the society, and are referred with derogatory labels like ‘hijras’ [4,5]. The societal outlook, as well as acceptance of transgenders has been quite different in India than the western cultures.

Transgenders are subjected to many social adversities. They often face discrimination in education, housing, health, employment and official bureaucratic dealings [6,7]. They are often required to tend to jobs below their intellectual capacity. Many generate income from petty extortion, performing at ceremonies, through begging and sex work [8]. Violence against transgenders, especially towards sex workers, is common and occurs in a variety of settings [9,10]. Many transgenders have experienced abuse during childhood, and the rates of sexual abuse has been reported to be higher in transgenders than those with other gender orientations [11]. These adverse life circumstances are likely to have adverse psychological impact on transgenders. Moreover, access to health care services are reported to be more adversarial towards transgenders, which may result in their health concerns not being addressed fairly [12].

Research on transgenders from India has remained constrained to mainly to ethnographic account of lifestyle or as a risk factor for sexually transmitted diseases [13,14]. Since transgenders are faced with considerable psycho-social adversity and social exclusion, it is likely that they suffer from emotional distress and poor quality of life. In the unique cultural context of transgenders in Indian society, this pilot study was conducted to evaluate the symptoms of anxiety and depression and quality of life among transgenders who are treated in a tertiary care hospital.

The present cross-sectional descriptive study was conducted at a specialized clinic at a tertiary care teaching hospital in south India. The hospital caters to patients from in and around Chennai. The hospital provides free consultation services and the many of the investigations and medications are provided at subsidized rates. The clinic for tarnsgenders in the hospital is multidisciplinary and caters to a range of health concerns of the transgender population.

The present study was conducted among transgenders enrolled in the clinic between June 2014 and July 2014. After obtaining informed consent from the participants, information was gathered using a structured proforma by one of the investigators (M.P.). Data was gathered about the socio-demographic details and other pertinent data. Specific questions were asked about the age when gender dysphoria was felt, when the person left home, about experience of sexual abuse in childhood, acceptance by parents and peers and other relevant aspects of living as a transgender. Anxiety and depression were assessed using Hospital Anxiety and Depression Scale (HADS) and General Health Questionnaire (GHQ) was used to assess for emotional distress. WHO Quality of Life Scale Bref (WHOQOL Bref) was used to assess quality of life of the participants enrolled in the study. The study had institutional ethics committee approval.

General Health Questionnaire (GHQ) [17]: This is a 12 item screening instrument to assess for symptoms of distress. The questions are rated on a 4 point likert scale. The sum of the scores elucidates the presence of clinically significant symptoms of psychological distress and warrant further assessment. The scale has been widely used in the literature in clinical samples to screen for anxiety and depression.

The statistical analysis was carried out using SPSS version 17 (Chicago, IL). Since the present study was a pilot study, primarily non-parametric descriptive statistics were carried out. Median and range were used for continuous data while frequencies and percentages were used for nominal data. Kruskal Wallis test was used for comparing quality of life across various domains. Spearman correlation was used to find the association between different continuous variables in this small population. Mann Whitney U test was used to compare continuous variables across two groups to assess for significant differences between the groups. Missing value imputation was not done and a p value of 0.05 was considered as significant.

The study was conducted among 15 participants recruited from the multispecialty clinic. All the participants in the present study had transgendered from being male to being female. The demographic characteristics of the sample are shown in Table 1. Only one of the participants was married and lived in a nuclear family, while all others were not married and lived in special homes/hostels. Occupation wise, 6 were in formal gainful employment (2 physiotherapists, 1 counsellor, 1 social worker, 1 beautician and 1 priest) while 5 were sex workers and 4 resorted to begging.

Table 1 Demographic characteristics of the sample.

The transgender lifestyle and emotional distress related characteristics of the sample are depicted in Table 2. Though gender dysphoria started at a median of 11 years in the sample, the participants suffered for a median period of 8 years before disclosing it to their family members. The participants left home at a median age of 20 years. Thirteen participants (86.7%) underwent surgical or cosmetic changes at a median of 24 years. Though none of the participants had parental acceptance for becoming a transgender, no participants regretted the decision becoming a transgender. All the participants reported childhood sexual abuse and 11 (73.3%) had attempted suicide in the past. Substance use disorder was reported in 86.7% participants, most common being tobacco followed by alcohol and cannabis. The median HADS anxiety, HADS depression and GHQ scores were 9, 14 and 8 respectively. The HADS scores were above the cut-off of 8 for anxiety and depression subscales for 10 (66.7%) and 15 patients (100%) respectively. The HADS anxiety and depression scores correlated well with each other (Spearman r=0.800, p<0.001). The GHQ scores also correlated well with HADS anxiety and depression scores (r=0.764, p=0.001 and r=0.963, p<0.001 respectively). The median quality of life domain scores ranged from 50 to 63, the lowest being for social quality of life and highest for environmental quality of life. The quality of life scores are depicted in Figure 1. The quality of life varied across the groups (Kruskal Wallis χ2=8.515, d.f.=3, p=0.036).

Table 2: Characteristics of the patients. 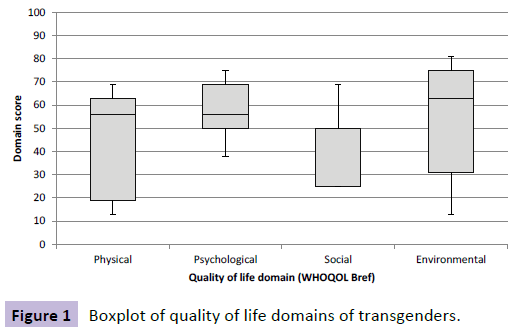 Figure 1: Boxplot of quality of life domains of transgenders.

Table 3 Relationship of type of occupation and other variables.

The present study suggests that a about two-thirds of the transgenders experience significant anxiety symptoms, while almost all such persons have significant depressive symptoms. The symptoms of anxiety and depression often occur together. Previous literature from elsewhere suggests that transgenders are likely to experience greater rates of distress, anxiety and depression as compared to the general population [20,21]. The increase in rates of anxiety and depression can be accounted by many factors including stigma, discrimination, lack of peer support, as well as other stresses like victimization and adverse economic circumstances.

The study suggests that may resort to begging and being a sex worker to sustain themselves economically. Such occupations may be associated with greater rates of anxiety, depression and emotional distress. It may be intuitive that engagement in occupations of begging and sex work are promote poor selfesteem, and are resorted to for survival when other opportunities are not easily accessible. There lies the usefulness of ensuring equitable opportunities and social inclusion of transgenders. The Supreme Court of India has taken cognizance of the plight of transgenders and have made efforts to recognize the rights of transgender [24]. Strangely, the formal gainful employment was associated with poorer physical, psychological and environmental quality of life. Probably, the lower quality of life reports might have stemmed from regular interaction with other non-transgendered individuals and finding the participant’s own circumstances not as optimum as other’s.

In the present sample, all the participants had experienced sexual abuse during childhood. Previous studies also have reported greater rates of childhood sexual abuse among the transgendered population [11]. Whether the transgendered role occurs as a consequence of sexual abuse is not resolved yet and requires prospective follow-up studies for definitive answers. The need for ensuring safety of children and preventing child sexual abuse remains, as such abuse can independently lead to symptoms of psychological distress including depression and poor coping [25]. The study also documents high rates of substance use disorders in this population, as has been found elsewhere [26,27]. This raises the need for clinicians to address the consequences for substance use and initiate counselling for harm reduction. High rates of attempted suicide in the past also suggest for the presence of psychiatric disorders and failure of coping coupled with adversity, and hence the need for clinicians to be sensitive to needs of the transgender population [28,29].

The findings of the study need to be interpreted in the context of strengths and limitations. The strengths of the study include systematic assessment for depressive and anxiety symptoms as well as quality of life in a rather ‘hidden’ population. Also, the relationship of anxiety, depression and quality of life with various facets of experience of being a transgender was evaluated. The limitations of the study include a limited sample size from a general hospital, absence of a suitable control group, assessment based upon self-report and absence of a standardized instrument to make a psychiatric diagnosis.

To conclude, transgenders in India suffer from significant levels of anxiety and depression, and have impaired quality of life primarily in social domains. The cause of emotional distress and poorer quality of life can be manifold, including stigma, discrimination, isolation, lack of employment opportunities and victimization. This pilot study provides a base for further research into systematic evaluation of the change in psychological distress with social empowerment of transgenders, and the assessment of unique felt needs of transgender population in accessing medical and psychiatric healthcare.