The results of the present study suggest that the most common causes of unnatural deaths are suicides and accidental deaths, and the major causes of suicides are depression and fear of punishment in the Chinese government officials.

Unnatural deaths are caused by external factors which include death due to intentional injury such as suicide or homicide, and death caused by unintentional injury in an accidental manner, such as traffic accidents [1]. These events are of major concern for public health care and politics. The unnatural death investigation in China seems vague to the world [2]. Government official is a special group. Unnatural death of government officials in the past was a murky issue, and this topic was seen as a taboo in China. In the recent years, however, this situation has been changed. The public are encouraging authorities to publish more information about unnatural deaths of government officials, including those who killed themselves after suffering from depression. Therefore, the aim of this study was to analyze the causes of unnatural deaths in the Chinese officials, and to provide countermeasure for the prevention of the occurrence of similar cases.

The statistical analyses were performed with the statistical software package SPSS 21.0 (SPSS Inc., Chicago, Illinois). The difference in percentage was tested using the chi-square test. The multiple testing at the group level was done exploratively, and no corrections were made for these tests [4]. A P-value of < 0.05 was considered statistically significant. 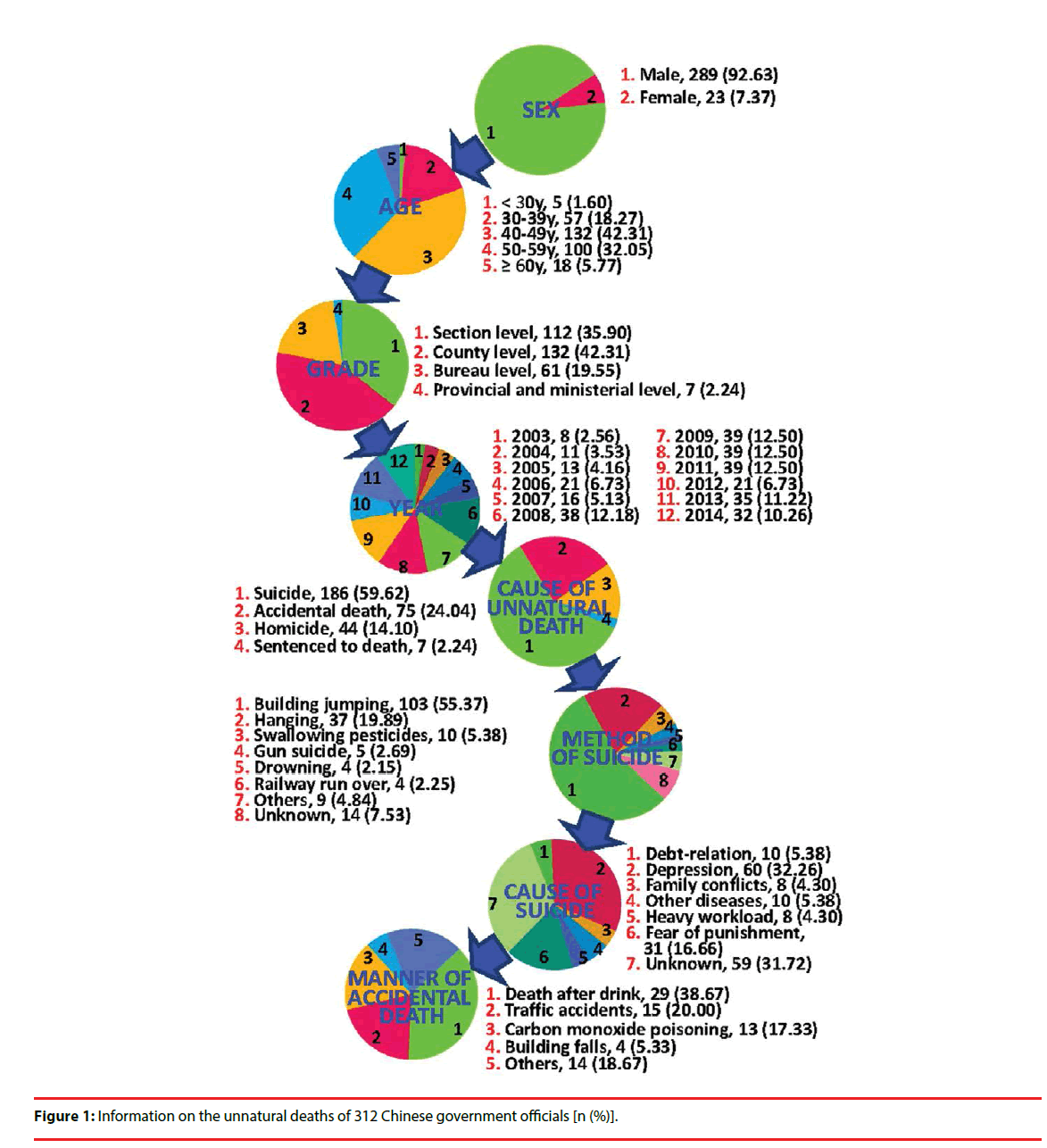 ▪ Cause of unnatural death

The results of the present study provide valuable and previously unavailable information about the unnatural deaths of the Chinese government officials. Our results show that the major causes of unnatural deaths in the Chinese officials were suicides and accidents. It involved many departments such as party committees and government agencies, transportation, politics and law, education, taxation, finance, etc. The grades of the officials were from section level to the provincial and ministerial levels. The most common grades were the section and county levels. The three leading causes of unnatural deaths were suicide, accidental deaths, and homicide. The dominant methods of suicide were building jumping, hanging, and swallowing pesticides. These suicide methods were different from those in the general population. Poisoning with agricultural chemicals or rat poisons (62%) or other substances (7%), hanging (20%), and drowning (5%) were the first three common suicide methods in the general population in China [5]. The causes of suicides were depression, fear of punishment, debt-related dissension, other diseases, family conflicts, heavy workload, and so on. The main causes of accidental deaths were sudden death after a heavy drink, traffic accidents, and carbon monoxide poisoning in a car.

In recent years, official suicides were increased in China, reflecting that our social development is not balanced. Indeed, there are various contradictions and problems such as social unfair, judicial injustice, and mutual hatred between classes, which are affecting our social harmony. According to the data from 1995 to 1999, the estimated mean national suicide rate in China was 23 suicides per 100, 000 people per year, and there were a total of 287,000 suicide deaths per year [3,6,7]. But the overall suicide rate in China has dropped dramatically in the recent years, by 2011 this had fallen to 9.8 per 100, 000 per year [8]. There are 6 million civil in China. The suicide rate may be lower in the government officials than in the general population. Thus, official suicide is not a common social phenomenon.

Suicide is the leading cause of unnatural death and years of life lost (YLL) in contemporary China as well as in many other parts of the world [1,5,9]. Approximately one million people commit suicide each year, or about one life lost every 40 seconds [5]. Suicidal behaviour is a complicated phenomenon. It is associated with social and environmental factors and particularly with a variety of traits and disadvantages on a personal level. A great number of studies have demonstrated significant relationships of suicide with personal sociodemographics, life stressors, biological features, psychological traits, psychiatric problems, coping skills [10-12], etc. Psychological pain is thought to be of great importance, playing an indispensable role in the process of becoming suicidal [13]. The causes of official suicides are complex and worthy of further analysis. Officials generally have the pressure of work, life, organization and society. The work of officials is very busy, there are a lot of daily meetings, and their work often requires perfection. They always faced with the negative feedback of the people around them. In addition, they often need to travel, the work and rest are irregular, and the burden of life is also very heavy. Undoubtedly, corruption, career ring true, and excessive work pressure may be the inducements of official suicides. Thus, raising awareness and removing the myths about suicide are very much needed in order to make the measures more receptive by the government departments.

Official suicides are also correlated with the social fair and equitable. Injustice of cadre appointment may happen at the grassroots level departments, which is an important cause of psychological imbalance. Most suicidal officials have mental health problem, many even suffer from depression [14]. In the general population aged 49.5 ± 19.0 years in Shanghai, psychiatric disorders have become the major cause of suicides (21.5%). For suicidal drowning, the three leading psychiatric disorders were depression (33.7%), depression status (30.8%) and schizophrenia (20.2%) [7]. However, some suicidal officials were alleged corruption. When the scandal was disclosed, he committed suicide dreading his punishment. Thus, the second reason of official suicides is to avoid legal punished, and/or to interrupt the investigative trail to protect vested interests. It is also noteworthy that the accidental deaths of officials were mainly due to sudden death after a large number of drink and accidents. These results suggest that the causes of unnatural deaths differ prominently between the general Chinese citizens and government officials. Therefore, it is very important to identify the risk and protective factors that influence suicidal behaviors and suicide deaths [10].

Frequent unnatural deaths of the officials reminder that we should strengthen the prevention education for cadres [15,16]. First, officials should strengthen their self-cultivation, and actively build a healthy spiritual home. Second, the community should create a relaxed environment, moderately tolerant to officials. Officials should straighten seat, relax mentality, be an official for the people, continuously improve the psychological quality, enhance the ability to adapt to the environment. The government must function by the mandate of the people, empathize with the feelings of the people, and work for the well-being of the people. Third, we should further improve the relevant system. The community should give right attention of official unnatural deaths, create a clear political environment to relieve their psychological stress, and help officials to build a good spiritual home. Identifying and reducing the risks of unnatural deaths of the government officials will improve the government’s credibility and public health.

Several important limitations should be borne in mind when interpreting these results. Firstly, this initial study included only a limited number of victims but did not include all unnatural deaths of the Chinese government officials during the period between Aug. 2003 and Jul. 2014. The sample size in this study is also a bit small. Secondly, some information was missed in some victims. Thirdly, there was not a control group in this study. Finally, several mental disorders were not adequately assessed before they died, and the forensic autopsy data did not obtained in these victims. Thus, the real reason of the sudden deaths is unclear and awaits further examination.